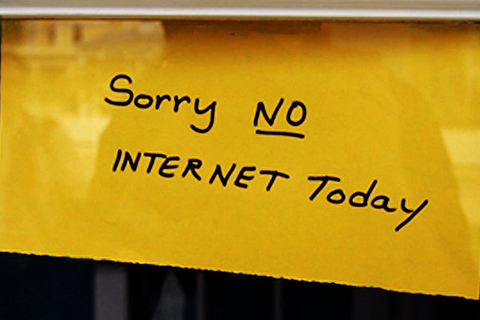 After assessing the situation, we decided to extend the mobile internet ban till 10 am on Monday,” said Inspector General of Police, Kashmir range, Syed Javid Mujtaba GilLani. He said the broadband internet services would be restored at 8 pm on Sunday.

The blanket ban on internet services in Muslim-majority Jammu and Kashmir on the sacred occasion of Eid-ul-Adha has come in for severe criticism from people who slammed the Peoples Democratic Party-led government for “pushing Kashmiris to the wall with such extreme steps.”

The ban on all internet services, including Broadband, was initially fixed for 41-hours beginning 5 am on Friday, but was extended till 10 am on Monday, making it a 77-hour ban.

The ban, according to people of Kashmir, is “a draconian step taken by the state government on the sacred occasion of Eid-ul-Adha.”

“It’s unthinkable that in this age of information technology, you are snapping internet for days together,” said Muhammad Munner, a commerce graduate from Nowhatta locality of Old Srinagar. “What adds to the outrage is the fact that such a ban is imposed on Eid-ul-Adha in J&K when people need internet services the most. There are Kashmiris outside J&K who want to greet their families in the Valley on this festive occasion. They were not able to do so. I have hardly heard about a place where such extreme steps are taken by elected governments.”

Munner said the ban has “completely exposed” PDP ministers who claim to represent Kashmiris. “It’s an unpardonable act,” he said. “PDP’s ministers often talk of ending alienation in Kashmir and taking steps for welfare of people. But here they are pushing people to dark ages.”

Gowhar Nazir, an MBA student from Srinagar, said the ban is ridiculous. “We never expected this from the present government,” he said “I was preparing for an entrance examination and had to access internet, but I couldn’t. The government should not have gone to this extent to muzzle people’s voices.”

A group of students, who had to return to their colleges and universities outside J&K after celebrating Eid with their families in Kashmir, were up in arms against the government over the internet ban. “We are not able to get our air or train tickets booked. This is outrageous,” they said.

A group of tourists from Pune, who were in Kashmir for the past two weeks, said the ban troubled them a lot. “We had to book a ticket to Mumbai on September 25 when the prices were very low. We couldn’t do it because of the internet ban. Now we have to pay more for our tickets,” said Sunita, who works in a private company in Pune. “Such decisions damage Kashmir’s tourism image as well. Nobody will visit Kashmir after hearing about the ban on internet.”

“We used to have a video chat every day with of parents who have gone to perform Hajj. For the past two days, we are not able to connect with them,” said Adil Rashid, a resident of Srinagar.

“After assessing the situation, we decided to extend the mobile internet ban till 10 am on Monday,” said Inspector General of Police, Kashmir range, Syed Javid Mujtaba GilLani. He said the broadband internet services would be restored at 8 pm on Sunday.

Asked what prompted them to impose ban on internet services on Eid-ul-Adha, the IGP said “the step was taken to ensure peace in Kashmir.”

“Had we not banned the internet, there were large apprehensions of communal clashes. Anti-peace elements would have uploaded pictures and videos that would fan communal fire. To avoid this, we decided to impose the ban,” he told Greater Kashmir.

According to an order signed by the IGP, the ban was imposed for 41 hours—from September 25 to September 26.  However, it was extended till 10 am Monday. Similar orders were issued in Jammu as well.

National Conference’s working president Omar Abdullah took a dig at Prime Minister Narendra Modi over the internet ban in Kashmir. “The irony of listening to Prime Minister lecturing about digital India while we are totally disconnected. The PDP-BJP regime is pushing people of the state to the wall,” he said.