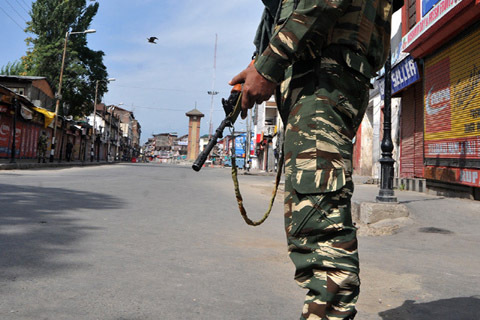 All the areas in old Srinagar have been sealed and people have been caged in their homes. Officials said that restrictions under section 144 CrPC are in place however locals told here that strict curfew is in place.

All shops, business establishments, Banks and government offices are closed and roads are giving a deserted look in and around Srinagar.

Few Private vehicles which are moving around are being thoroughly checked and frisked.

Reports from south Kashmir said that heavy deployment is in place in every town and village and People have been told not to venture out.

According to police officials “security has been beefed up only to protect people and to maintain law and order.”
Reports from Tral, the native place of Burhan said that army has completely taken over and soldiers conducted patrolling even last night.
Reports of complete shutdown and restrictions have reached from all the ten district headquarters of the valley.