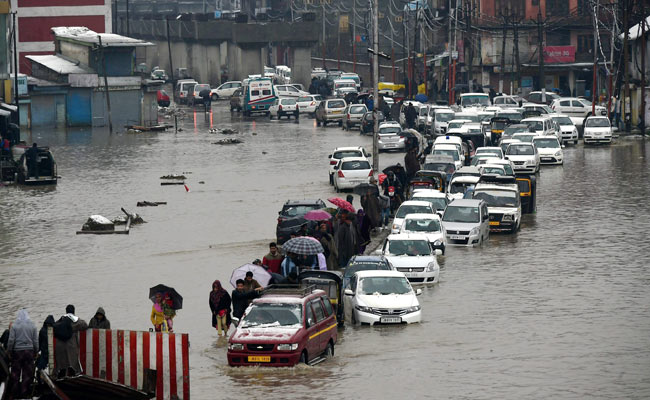 Srinagar: The water level in river Jhelum in this summer capital city has touched the “flood declaration mark” and is approaching towards the “danger level”. The situation is, however, expected to improve by Friday as weatherman predicts marked decline in the intensity of rains.

As the water levels in river Jehlum flow above alarm levels, due to incessant rain and snowfall in the Kashmir Valley over the past couple of days, fear gripped valleyites on April 6 and they mostly preferred to stay indoors. There was less visibility of movement on the roads and in the markets while offices and educational institutions remained closed.

An alert has been issued by Irrigation & Flood Control Department, Kashmir, asking people especially those living along the embankments of the river and low-lying areas of central Kashmir to remain vigilant. The alarm levels at Sangam and Ram Munshi Bagh in south Kashmir and Srinagar, respectively, were flowing above alarm level. The latest water level of Jehlum (at 7 pm on 6 April) at Sangam (Anantnag) was 20.30 ft, at Ram Munshibagh water level was 18.20 ft and Asham (Bandipora) was 10.25 ft.

The flash floods triggered due to heavy rains in north Kashmir caused damage to several houses and standing crops in Sheeri and Gantmulla in Baramulla district. A number of residential houses were reportedly submerged in Kripalpora Payeen in Pattan area of the district and many families were evacuated. The flood-like situation triggered by incessant rains also caused damage to schools, mosques and orchards in several parts of north Kashmir, especially Baramulla and Kupwara districts.

Two passengers went missing after a Tata Sumo vehicle plunged into river Brangi at Kokernag in south Kashmir’s Anantnag district. Eight passengers were travelling in the vehicle. While six people were rescued by police with the help of local people, two persons, including driver, went missing. The identity of another missing person was yet to be ascertained. In another incident, three persons travelling in a private vehicle were injured after a poplar tree fell on their vehicle at Sangrama on Srinagar-Baramulla highway in north Kashmir. In yet another incident, 40 sheep were killed after a structure they were in collapsed due to heavy rains in Mahore in Reasi in Jammu division of the state.

A youth, identified as Asif Manzoor Rather of Ajas Bandipora in north Kashmir, died while two others sustained injuries at Hamray in Baramulla district when they came in contact with a fallen transmission line (beneath the waters) near Hamray highway. The trio was on way to Pattan to participate in an Army recruitment rally. A woman, Khatun Begum, died due to natural lighting in Rajouri district in Jammu division of the state while several people reportedly got trapped in flash floods in Poonch district, April 06.

Water reportedly seeped into some residential houses in Bemina in Srinagar. Even patients at the local Imam Hussain hospital in the area were shifted to upper floors, reports said. Water spillover and water-logging in most of the city roads created panic and hurdles for smooth movement of the traffic. Cross-LoC trade that was scheduled on April 06 was suspended and examinations postponed. The government announced all schools and colleges across the Valley to remain closed due to bad weather till April 10 (Monday). Pertinently, Lok Sabha by-polls for Srinagar Parliamentary constitutency are scheduled for April 09.

Police on April 06 claimed to have established emergency help lines across the Valley to meet any possible challenge and eventuality and emergency control rooms in all the districts of the valley to provide help to the people in need. Directorate of Health Services Kashmir (DHSK) too claimed to have constituted divisional and district level control rooms for facilitation of healthcare services to the general public. DHSK also issued health advisory asking people to take precautions to reduce the impact of weather/rains on their health. The statement issued by DHSK read that due to incessant rains over the past couple of days, there was a possibility of an increase in respiratory tract infection and water-borne diseases. “There is an increased risk of dermatitis, conjunctivitis, ear/nose/throat infection through direct contact with contaminated water. Therefore, avoid contact with polluted water and wear protective clothes and rubber shoes while going out in water.”