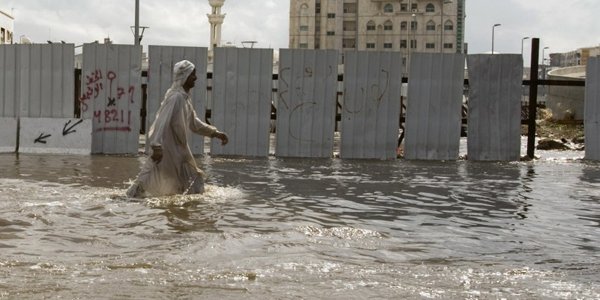 Riyadh:Flash floods sweeping Saudi Arabia for the past week has left more than a dozen dead as the kingdom grapples with heavy downpours across the country.

Saudi Arabia’s civil defense agency said in a statement on Thursday that at least 18 people were killed in the floods which struck areas starting from the desert capital of Riyadh to Hail, Mecca, Medina, Al-Baha, Asir, Najran and Jazan.

The statement said a total of 915 people were rescued by the agency.

Another report by the Saudi Red Crescent said one died and 27 people were injured due to heavy rain and floods in Al-Baha, more than 300 kilometers (180 miles) north of Jazan city, located southwest of Saudi Arabia.

Al-Ekhbaria, a state-run television news channel, reported on its Twitter feed that two people were killed in the Jazan region when three areas in the mountainous district were inundated.

Traffic chaos caused by a storm on Wednesday prompted officials in Riyadh to close schools.

However, heavy rainfall has mostly affected areas in the south close to the border with Yemen, where downpours have caused deaths while inflicting losses on properties and infrastructure.

Yemen’s Interior Ministry and security officials said on Thursday that 16 have been killed over the past 24 hours, mostly in Amran and Hajja, two provinces north of the capital, Sana’a.