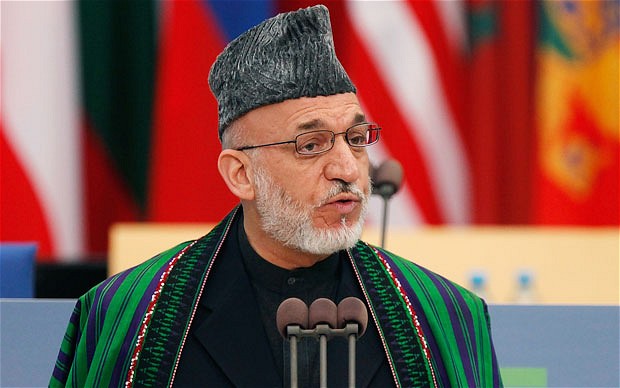 Kabul:Former Afghan President Hamid Karzai has lambasted the United States’ new policy toward his country, saying it carries a “message of war and bloodshed” in the region.

Karzai made the remarks in an interview with the BBC Urdu on Wednesday, adding he believed that Washington’s new policy “has some hidden conspiracy or strategy for this region.”

Back in 2014, the US-led occupying forces in Afghanistan officially announced the end of their combat operations in the country, saying they now had a mission to “train, advise, and assist” Afghan troops.

However, US President Donald Trump’s administration recently permitted the deployment of an additional 3,000 troops to Afghanistan, where the US already has 11,000 forces.

Karzai also said Kabul did not favor US military action — launched from its bases in Afghanistan — against neighboring Pakistan to purportedly eliminate what Washington calls “terrorists’ safe heavens.”

“We have never favored military action against Pakistan; we don’t want that to happen,” he said.

US officials have long been frustrated with what they say is Pakistan’s unwillingness to act against militant groups, including the Pakistani Taliban and the Haqqani network, a militant group that operates on both the Pakistani and Afghan side of the border.

On Tuesday, Marine Corps General Joseph Dunford, who is the chairman of the US Joint Chiefs of Staff, told the Senate Armed Services Committee that Inter-Services Intelligence (ISI) directorate, Pakistan’s main spy agency, had maintained relations with “terrorist groups.”

US Defense Secretary Jim Mattis also told a House Armed Services Committee hearing on Tuesday that Washington would try “one more time” to work with Islamabad to curb Pakistani militants before resorting to other measures over Pakistan’s purported support for terror groups operating in Afghanistan.

“If our best efforts fail, President Trump is prepared to take whatever steps are necessary,” he said.

Islamabad, in return, bristles at what it says is a lack of respect by Washington for Pakistan’s sacrifices in the US’s so-called war on terror. Pakistan estimates that there have been 70,000 casualties in militant attacks since it joined the US “war on terror” after the September 11, 2001 attacks.

Karzai called Pakistan his country’s “brother,” saying he wanted Islamabad to boost friendship and cooperation with Kabul.  However, he said that “Pakistan will also have to treat Afghanistan as a sovereign and dignified country.”

Elsewhere in his remarks, Karzai warned India not to fall into line with the US’s approach toward Afghanistan, saying the approach was part of a “bigger strategic game,” which would not bring peace to the region.

He also advised New Delhi to maintain an independent approach based on the shared interests of India and Afghanistan.

Washington led a coalition of its allies in an invasion of Afghanistan about 16 years ago to topple the then-Taliban regime. The group then launched a militancy against both foreign forces and the Afghan government and people.