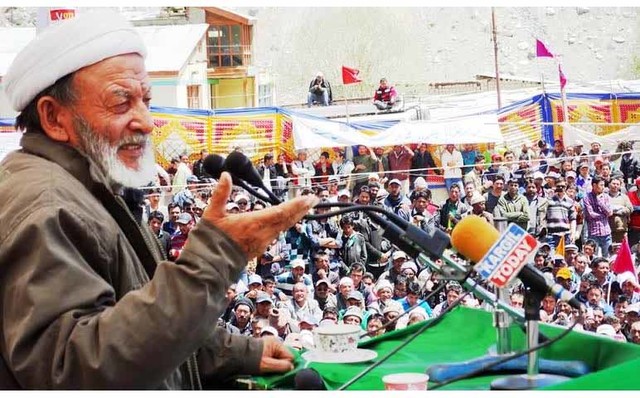 Founder of IKMT Kargil passes away at 76

Kargil:One of the prominent religious Shia scholars of J&K and the founder and Chief Patron Imam Khomenie Memorial Trust Kargil Hujatul Islam Sheikh Mohammad Hussain Zakiri passed away on Thursday at his residence at Baghe-e-Khomeni Kargil after a brief illness.

More than 20,000 people in the form of mourning procession assembled at Hussaini Park Kargil where his Nimaz-e-Jinaza was performed by chairperson Guardian Council Hujatul Islam Wal Muslameen Sheikh Mohammad Mohaqiq.

He was 76 years old, born in a middle class family from Bagh-e-Khomeni in 1940. After his basic education, he went to Najaf Asharaf in Iraq for Islamic studies and after returning Kargil in 1971 formed a religious organization Anjuman-e-Maun-e-Islam in 1973 which provided basic Islamic Education to children and also advocated on issues related to women and their rights.

He was greatly influenced with the 1979 Islamic Revolution of Iran, later became instrumental in establishing Muthahry Public School in Kargil which is now an educational organization of 15 branches.

He was the founder of Imam Khomeni Memorial Trust Kargil which was founded in 1989 and later established two theological schools i.e. Jamia Imam Khomeni for boys and Jamia Tu Zehra for girls in Kargil.

Besides this, Sheikh Hussain Zakiri was a prominent poet and scholarly person having published many books and poetic collections.