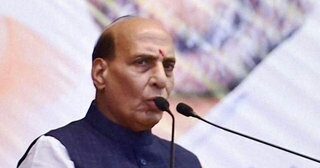 GOI is Ready to talk to everyone in Kashmir:Rajnath Singh

He noted that he had visited the Kashmir valley thrice during the unrest last year.

“When there was unrest, I went to the Kashmir valley thrice. I have spoken each time. The government wants the Kashmir situation to improve. We have taken every initiative,” he said.
“I also want to inform the House that there has been no dearth of official communication,” he said.

While talking about steps and schemes initiated to normalise the situation in Jammu and Kashmir, the Home Minister said he does not, at the same time, dismiss the work done by the previous governments.

Putting the onus on Pakistan for resumption of dialogue, Singh said that it should commit to “end the state-sponsored terrorism.”

Home Minister Rajnath Singh also said in the Rajya Sabha that the government was ready to talk to all stakeholders in Jammu and Kashmir to normalise the situation there.

“Pakistan should at least make a beginning and say it is willing to talk and end the terrorist activities and seek the support of any country in the world (in ending terrorism). Pakistan should take an initiative,” he said.
Singh was responding to questions by members as to why talks are not being held with Pakistan.

“The previous (UPA) government had also placed a condition for Pakistan to give a commitment to end state-sponsored terrorism,” he added.

To questions over the situation in Kashmir, the Home Minister said,
Listing some of the initiatives taken, he said the selection process for the armed police forces is over and job opportunities for Kashmiri youth have increased.

He added that never before have there been recruitment of as many as 10,000 SPOs in Kashmir valley and five new India Reserve Battalions have been raised there with as many as 4,500 personnel.

Besides, he said, central armed police battalions have been raised in J&K with 1200 personnel.

Referring to the visit of an all-party delegation to Kashmir during the unrest last year, Singh said Jammu and Kashmir Chief Minister Mehbooba Mufti had even written a letter, “inviting all such (separatist) forces to talk to the visiting delegation. However they still did not turn up.”

Mentioning about the snub given by separatist Hurriyat leaders to some members of the delegation when they tried to meet them, he said, “These people (the delegation comprising Yechury and others) were forced to beat a hasty retreat. What do they expect from us?”

“We have decided that under any circumstances the family of soldiers killed will get overall financial support of more than Rs 1 crore,” he said.

He said although sacrifices of the soldiers cannot be measured in monetary terms, “they got less money earlier”.
He added, “Whenever our soldiers are martyred, we take full precautions to send his body to his village and the district authorities as well as the MLAs and MPs concerned are informed to be present in the funeral ceremony.”
Earlier, Leader of Opposition Ghulam Nabi Azad asked what the government has done in the Kashmir valley to normalise the situation.

Sharad Yadav (JD-U) asked why the government is not engaging in a dialogue with Pakistan to normalise the situation in Kashmir.

“Why have you closed the road? Why don’t you talk? Why do you want to suppress everything with the force of gun? Why has the agenda of governance not been implemented, as the demand has been made by the state Chief Minister also? The process of dialogue is shut and there are no talks (with Pakistan),” he asked.

Sitaram Yechury (CPI-M) said Jammu and Kashmir situation is not just a law and order problem. He said the trust deficit is growing by the day in the Kashmir Valley.

“Why not the commitment of starting a dialogue with all stakeholders? Merely tackling militancy is not going to solve the problem,” he said, adding that talking to Pakistan was also raised by the chief minister.