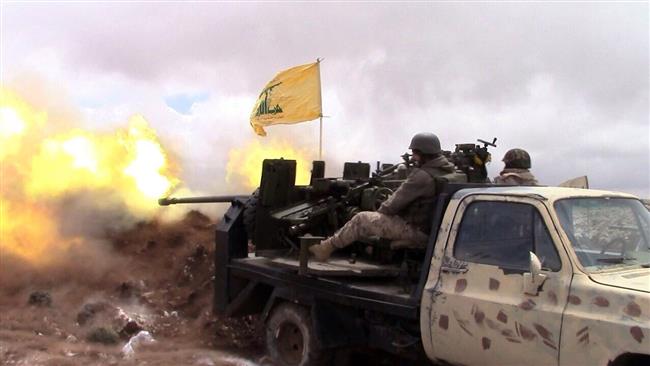 Fighters of Lebanese Hezbollah resistance movement have attacked positions of the Daesh Takfiri terror group in an area close to the border with beleaguered Syria, killing a number of militants.

On June 19, two Daesh commanders and seven other militants were killed during two separate Hezbollah operations.

A militant commander, identified as Abu Aisha al-Libi, and six of his comrades were killed, when Hezbollah fighters targeted a militant hideout on the outskirts of Arsal town, which lies about 124 kilometers (77 miles) northeast of Beirut.

Hezbollah fighters killed another Daesh commander, identified as Abu Akrama al-Zohouri, and another militant identified as Ahmad Abed al-Mohsen, during a separate offensive in the same area.

Takfiri militants have infiltrated into Lebanon from neighboring Syria. The foreign-sponsored conflict in Syria, which flared in March 2011, has claimed the lives of more than 250,000 people and left over one million injured, according to the United Nations.

Hezbollah resistance fighters have been helping the Syrian forces fighting against Takfiri militants on the Syrian soil near the border with Lebanon.