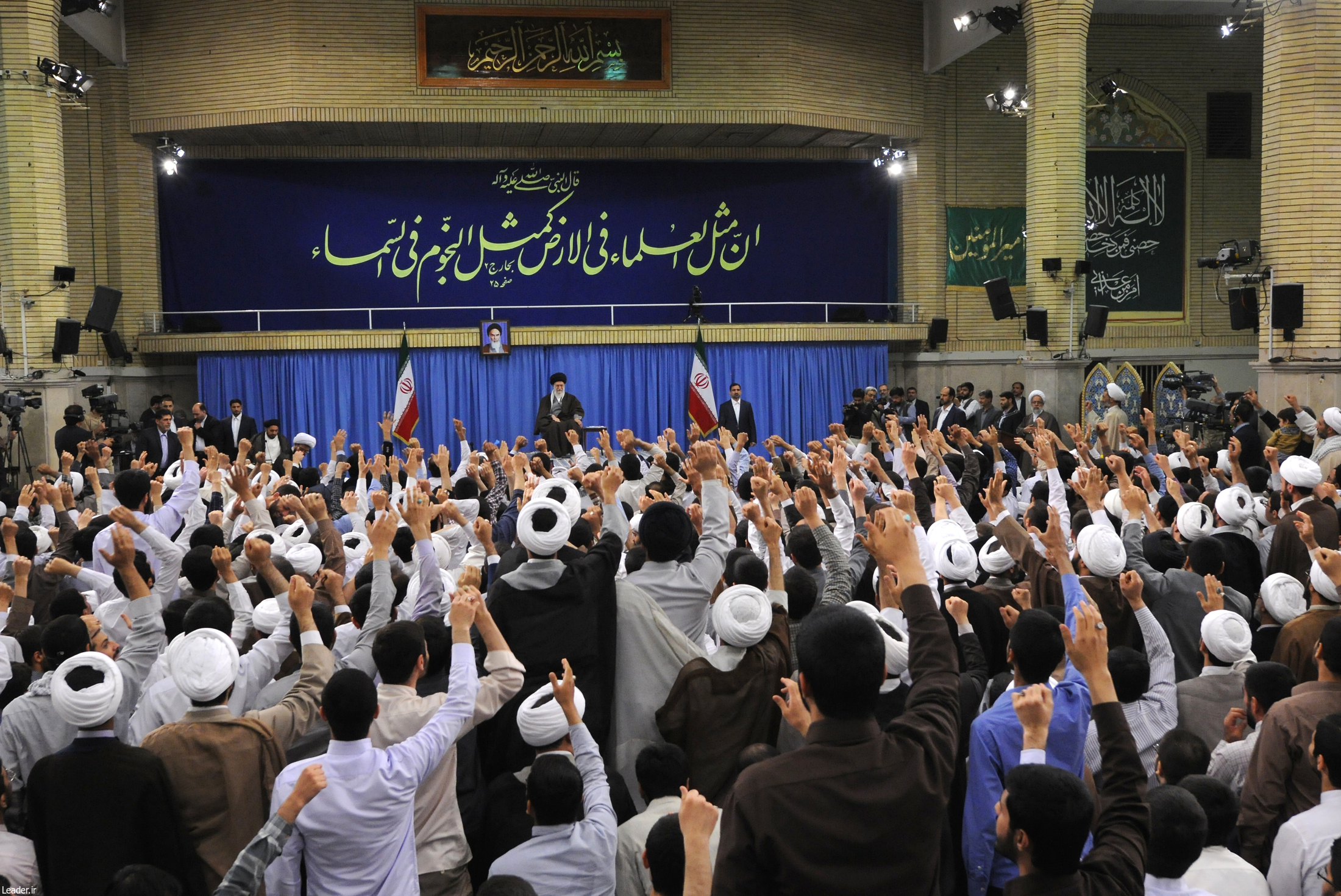 Tehran:Leader of the Islamic Revolution Ayatollah Seyyed Ali Khamenei in a meeting with a group of Tehran seminaries’ directors, teachers and students on Sunday highlighted “intellectual and religious guidance”, “political guidance and bolstering insight” and “guidance and presence in social services’ arena” as the three main tasks of the clergy, noting: “By acquiring necessary qualifications and knowledge, in today’s different world, clerics must prepare themselves for fulfilling decisive obligations in the society.”

Recommending the clerics to appreciate values and responsibilities of the clergy, Ayatollah Khamenei added: “[Even] if all the forms of expertise needed by a society exist in the best form, when the society is not religious, that nation will suffer loss and experience real problems in this world and the afterworld and this huge responsibility, i.e. transforming the society into a religious one, falls upon religious scholars, the clergy and young clerics.”

The Leader of the Islamic Revolution described religious guidance as “elucidation of pure Islamic thoughts” and referring to the role of cyberspace in promoting religious misgivings and the existence of political motivations for inculcating deviant and wrong thoughts into the minds of youths, Ayatollah Khamenei said: “This field is a real battlefield and the clergy and young clerics must be on war footing and prepared to jump into the battlefield of countering misgivings and wrong and deviant thoughts.”

The Leader of the Islamic Revolution referred to “reactionary, fanatic, [and] apparently dogmatic Islam devoid of the sense of spiritual facts” as a flagrant manifestation of deviant thoughts, adding: “On the other edge of this [pair of] scissors, ‘eclectic Islam’ and ‘American Islam’ are engaged in combat with ‘pure Islam’.”

The Leader of the Islamic Revolution said “understanding pure Islam which is based on the [holy] book and tradition” by resorting to the tool of wisdom and Islamic thought was a major task assigned to the clerics, adding: “[Following in] the footsteps of the prophets requires promoting this noble thought and the clerics are following this happiness-inspiring path, i.e. religiously guiding people.”

In this regard, the Leader of the Islamic Revolution underscored the significance of deepening of hereditary [traditional] beliefs of people, saying: “Through correct argumentation, the hereditary beliefs which may have been degraded due to the turn of time must be deepened and driven to the right track.”

Ayatollah Khamenei highlighted “political guidance” as another important task of scholars and clerics, saying: “The reason for constant insistence on the necessity of a revolutionary character for the seminaries is that the continuation of the correct and revolutionary drive in the country and the society is not possible without a persistent presence of the clergy.”

The Leader of the Islamic Revolution referred to the issues of “tobacco [monopoly], constitutionalism and the petroleum industry nationalization movement”, saying: “Constitutionalism and the national movement failed to reach their objectives due to the discontinuance of the presence of the clergy, but Imam Khomeini’s dexterity was that he did not let the enemy call a halt to the presence of the clergy in the massive drive [which led to the 1979 Islamic] Revolution and afterwards because otherwise neither the Revolution would culminate in victory nor the Islamic Republic [could] continue its drive.”

“Like today, from the [very] start of the [Islamic] Revolution, the Americans were determined to push the clergy out of the Iranian nation’s general drive so that in the following stage people’s presence in the scene would be overshadowed and then the Revolution would end in failure, but they have so far failed to realize this objective and God willing they will not [in the future],” Ayatollah Khamenei said.

“In the Islamic Awakening cataclysm too, ‘religion’ brought people to the fray, but since religious organs in those countries are scattered, that [movement] did not continue and the Awakening failed to reach the necessary results; however, in the Islamic Republic, people’s presence in [various] fields has made the continuation of the revolutionary drive possible,” the Leader of the Islamic Revolution added.
After elucidating religious and political guidance, Ayatollah Khamenei focused on the third important task assigned to the clergy, i.e. “leadership and field presence in the arena of social services”.

“The contribution of the clerics to providing services to people, building schools, building hospitals and assisting people during other events in other sectors will mobilize popular forces into the scene and will prepare the ground for service providing,” added Ayatollah Khamenei.

The Leader of the Islamic Revolution recommended the clergy to “study effectively and brace for soul refining”, adding: “Concentrate your efforts on fulfilling clerical obligations which could be replaced with no other expertise. However, it must not be interpreted as eying posts, positions and job titles, rather, the main objective must always be satisfying God and Imam of the Age (Imam Mahdi whose presence May God expedite!).”

In another part of his speech, the Leader of the Islamic Revolution referred to remarks by some teachers and clerics from Tehran seminaries, adding: “‘Exercising care for the seminaries not to switch from clerical to academic structure’, ‘the plan of teaching ethics at seminaries’ and ‘selecting and recruiting clerics based on an area division’ are among responsibilities upon the directors of seminaries, which they must decide upon after conducting necessary studies on the issue.”

Ayatollah Khamenei highlighted the history and significance of Tehran seminary and the prominent scholars who have studied there, noting: “Tehran Seminary now has an identity which must be appreciated so that prominent individuals would be nurtured [there] in [Islamic] jurisprudence, rational sciences and interpretation and hadith.”

Prior to Ayatollah Khamenei’s remarks, Hojjatoleslam Ali Akbar Sadeqi Reshad, Chairman of the Council of Tehran Province Seminaries, touched upon the history of Tehran Seminary and its role in political and social developments, saying: “This seminary is active across the Province of Tehran with 33 schools, six specialized centers as well as 15,000 clerics and 1,600 lecturers.”

Noting that Tehran Province seminaries have dedicated 360 martyrs to the Islamic Revolution, Hojjatoleslam Reshad enumerated some activities and achievements of this seminary, adding: “Of course, a cause of worry for seminaries is that they have distanced themselves from their main identity and they have shifted to an academic identity.”

Some important points highlighted by the scholars and the clerics were as follows:

–    Necessity of spiritual basis in seminaries, promoting ethics, introducing successful patterns and introducing lifestyle to them
–    Insisting on faithfulness to clerical lifestyle, enjoying revolutionary spirit and practice, helping religion attract the maximum followers, and identifying temporal exigencies
–    Significance of interaction between seminaries and universities in the form of free-thinking forums
–    Strengthening direct communications between clerics and the public

–    Introducing “Solid Foundation” comprehensive plan with the objective of strengthening and updating scientific, ethical and social capabilities and preparedness of young clerics
–    Living problems of the clerics and proposals for bolstering seminaries in non-central areas with the objective of curbing migration of clerics for seminary studies
–    Necessity of overhaul in the education system of seminaries with the objective of increasing scientific productivity and preventing attrition of the motivations of young clerics
–    Successful presence of female clerics in the education and promotion of religious teachings and proposing the formation of “Muslim Female Activist Headquarters” in order to counter social and family vices
–    Necessity for the seminaries to precisely and wisely respond to people’s questions and doubts and other necessary issues by benefiting from the deductive and solid-based fundamentals of quintessential jurisprudence
–    Necessity of setting up specialized centers for promoting and teaching skills of preaching and religious persuasion [reasoning]

At the end of this meeting, congregational noon and afternoon prayers were led by Ayatollah Khamenei.