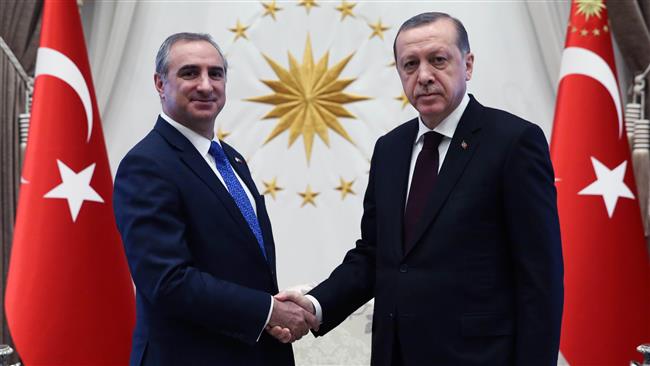 Ankara:Israel’s first ambassador to Turkey since a severing of ties over a Tel Aviv attack on a Palestine-bound aid ship has commenced work.

On Monday, Eitan Naeh officially presented his credentials to Turkish President Recep Tayyip Erdogan at the presidential palace in Ankara.

Naeh served as the deputy ambassador in London before his appointment to Ankara.

According to Turkey’s Anadolu Agency, Ankara’s new ambassador to Israel, Kemal Okem, will begin work later in the week.

Turkey expelled the last Israeli ambassador to Ankara six years ago after the regime forces stormed a Turkish aid flotilla traveling to the besieged Gaza Strip. Ten Turkish activists were killed on board the ship, which sought to deliver humanitarian assistance to the people in Gaza.

Turkey said in June that it had accepted Israel’s apology and compensation offer over the flotilla attack and decided to resume diplomatic ties. Reports said Israel had also guaranteed that Turkey could deliver its aid to Gaza unharmed although some sources in the occupied territories denied there was such a guarantee.

After meeting Erdgoan, Naeh said that the flotilla incident has been put behind by Turkey and Israel “to a large extent,” and that Erdgoan had stressed that “we have turned a new page in our ties.”

“Even when the ties knew peaks and valleys, the economic and trade relations were almost not hurt at all. Businessmen continued to do business [and] we are seeing an increase in the number of Israeli tourists,” Naeh added.

The United States and Britain are believed to have played a major role in the normalization of Israeli-Turkish ties. In October thousands of people took part in protests in Istanbul to condemn the normalization of relations, saying Ankara should have continued to denounce Israel’s deadly siege on Gaza.