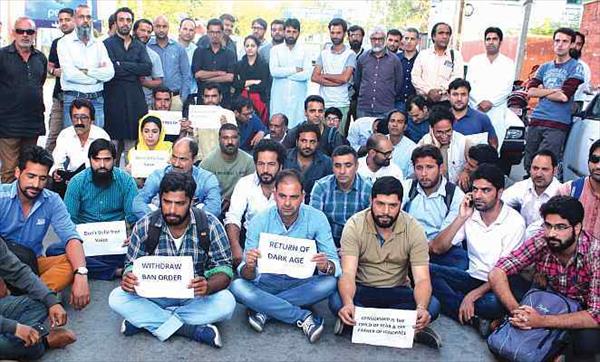 Srinagar:The Jammu and Kashmir government has banned the publication of Srinagar-based English daily Kashmir Reader calling it a threat to the “public tranquility”. The Deputy Commissioner Srinagar Farooq Ahmad Lone on Sunday evening issued the order asking the newspaper to stop its publication forthwith.

“I District Magistrate Srinagar do hereby direct the printer, published and owner of daily Kashmir Reader to abstain from printing and publishing of the newspaper namely Kashmir Reader till further orders so that disturbance of public tranquility is prevented,” the order reads.

Defending Lone’s decision, Education Minister Nayeem Akhtar said: “Deputy Commissioner must have acted on some complaint against the newspaper”.

Saying that the newspaper contains “material and content which tends to incite acts of violence and disturb public peace and tranquility”, the deputy commissioner, in his two-page order, has invoked section 144 of CrPC, Section 3 of Newspapers Incitement of Offences Act 1971 and Section 10 Press and Publication Act of 1989 to ban the publication of the daily newspaper.

“It has been observed that the contents published in the above newspaper is of such nature that can easily cause incitement of acts of violence and disturbance of public tranquility in the state of Jammu and Kashmir and Srinagar district in particular,” the order reads. “It has become expedient in the interest of prevention of this anticipated breach of public tranquility to forthwith take necessary precautionary measures”.
A day after the J-K government banned the publication of the Srinagar-based English daily Kashmir Reader, journalists from the valley on Monday took to the streets demanding an immediate revocation of the ban. The Kashmir Editors Guild (KEG), which termed the ban as “against the spirit of democracy and freedom of press”, sought intervention of the Press Council of India and warned of “direct action” if the government failed to revoke the ban immediately.