Kashmiri young boy selected for International Federation Championship Korea, upset over not getting sponsorship or support from Government

Srinagar:City Reporter:Mujtaba Hyder, a young boy from  Srinagar wins Bronze Medal U/70 Kg category in 6th National Tong Ill Moo Do Championship which was held in Delhi at MCD Indoor Hall Moti Nagar from 14th to 16th June. He is in class 10th studying in Kashmir Harvard School. Sixteen states had participated in the competition. It was organized by Delhi Tong Ill Moo Do Association.

Mujtaba Hyder hails from Zadibal Srinagar is being trained in Srinagar’s Young Unified martial art club from the last three years under the coaching of Arshid Aziz. For a couple of years Mujtaba participated in many Federation events at National, state and District Levels in Tong Ill Moo Do and 2nd National Belt Wrestling Championship etc where he bagged one gold medal, one silver and also a Bronze medal, Arshid’s coach said.

Mujtaba is upset due to not getting sponsored, not getting any government support and no one can see his potential. Arshid Aziz said, Majid went to School to meet his principal about his athlete Sponsorship but in vein.

Young’s the unified martial art club has been registered in 19 countries all over the world. They bring international players every year to participate in the world event and this time their two players have been selected for International Federation Championship and one of them is Mujtaba to represent the country and which is going to be held by International Federation in Korea where more than 20 Countries is going to participate, said coach Arshid Aziz. 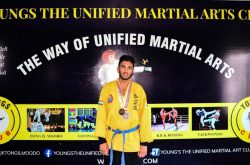 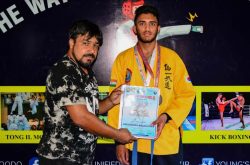 He said, unfortunately it is becoming depressing with few days remaining for the upcoming International Federation Championship Event in Korea and Mujtaba is upset due to not getting sponsored or any kind of government support to encourage his potential. Arshid Aziz said, He himself went to School to meet his principal about his athlete Sponsorship but in vein.

Arshad Aziz said that, If Mujtaba gets sponsored, will prove his mettle and proficiency in Tong Ill Moo Do and continue to bring laurels for the State at both the National and International levels.