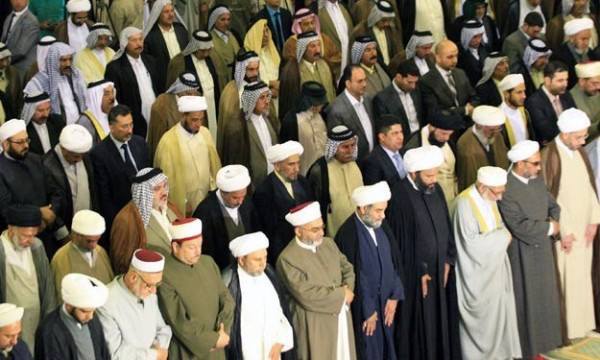 Kashmir:Shia-Sunni Unity “a Key to Success”

One who creates discord among Muslms is the enemy of islam and unity is a tool to defeat enemy for the betterment of Islam and Muslim Ummah.

On 30th September, 2016, after Friday prayers, the President of Jammu and Kashmir Itehadul Muslimeen and Executive Leader of Hurriyat Conference, Moulana Masroor Abbass Ansari led a huge Shia-Sunni unity march from Sazgari Pora to Baba Mazar Alamgari Bazar. Despite the severe curbs imposed by the state authorities, the march was attended by a huge number of people including many renowned preachers from both the communities. All the preachers laid stress on unity among the Muslim community and following the teachings of Prophet Muhammad (SAW). The march was significant considering that there are many vested interests who are hell bent on creating a sectarian divide in Kashmir so that they can sabotage the present uprising against the Indian rule.

Allah Almighty says in the Holy Quran in verse no.  103 of Surah Al-Imran “WAA’-TAS’IMOO BIH’AB-LIL-LAAHI JAMEEHA’W-WALAA TAFAR-RAQOO” (And hold fast by the covenant of Allah all together and be not disunited). Every verse of the Holy Quran is equally important and binding on all Muslims. One cannot be a true Muslim even if he or she skips a single verse of the Holy Quran. When the Holy Quran itself lays emphasis on unity, then how can a person who tries to create a divide among the Muslim Ummah be called as a Muslim.

Imam Ali (A.S.), in the fifth speech of Nahjul Balagah, said that Muslim unity brings development, blessing, power and dignity. He called for the enhancement of Muslim unity on numerous occasions. Imam Khomeini (R.A.) once said that while different sects of Islam are fighting with each other on the issue of where they should keep their hands while standing for prayers, the enemies of Islam are busy chopping these hands. He always urged the Shias and Sunnis to be united against the enemies of Islam. He even declared the week of birth of Prophet Muhammad (SAW) as the Unity Week for the welfare and betterment of Islam. He believed that the unity of the world can be achieved only under the banner of Towheed (Monotheism). Even the current leader of Islamic Revolution Sayyed Ali Hosseini Khamenei has said that those who provoke Sunni Muslims against the Shias and Shia Muslims against the Sunnis support neither Shias nor the Sunnis. They are opposed to Islam and work for the enemies of Islam. He even said that he was willing to sacrifice his life for the unity of the Muslim Ummah.

We need to ponder over how the enemies of Islam are using discord among the Muslim Ummah as a weapon to destroy us. They are using various methodologies to pit Shias against Sunnis so that they can succeed in their vile schemes. Such people are neither friends of Shias nor Sunnis. They are in fact paid mercenaries who exploit our naivety and gullibility and turn us against each other. America, Israel, Britain and their allies spend a mammoth amount of revenue to divide the Muslims as they know that this is the only way to weaken the pillars of Islam.

We need to forge unity amongst ourselves so that we can defeat their evil intentions. Even though we may differ in certain areas but these differences seem very insignificant when we take a look at the similarities we share with each other.

Muslims, who were once the most advanced people in the world have lagged behind other nations and governments over the centuries due to their own sectarian differences. Before the American continent was discovered and Europeans lived under feudal governments, Muslims had already made a huge progress in scientific, industrial, cultural and social justice fields. Unfortunately, the enemy was able to pit us against each other.

The disagreement among the Muslim Ummah is only helping the cause of our oppressors. Every one of us can see for ourselves how Muslims all over the world are suffering because of this divide. It is time all the Muslims got united and helped restore our community to its past glory. The real message of Imam Hussain (A.S.) and Karbala is to develop unity amongst ourselves. The entire valley of Kashmir should be united under one voice, one demand and one banner in the true spirit of Muharram. It is heartening to learn that Shia Sunni Coordination Committee of Kashmir has decided to organize Muharram processions and congregations together in order to defeat the evil intentions of vested interests who are on their toes to create a sectarian divide to weaken our freedom struggle. We need to be wary of such divisive policies if we are to achieve our goals.