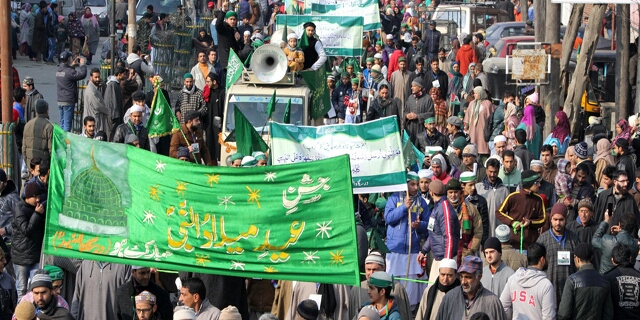 Srinagar:The Eid-e-Milad-un-Nabi (SAW) ans Unity Week was celebrated with religious fervor and gaiety across Kashmir valley today on Friday.
Braving chill, thousands of devotees took out Milad processions and offered prayers at various places including small and major towns, according to the reports receieved
In Srinagar city, thousands of people both men, women and children thronged to the Hazratbal shrine on the bank of Dal-Lake here that houses the “relic of the Prophet of Islam (SAW)”, and said congregational Friday prayers at the famous shrine.
Also the night-long prayers were also held at Hazratbal shrine. Similar prayer and shab-khani was done at other mosques, shrines and Khankhas across Kashmir valley.
According to correspondent, thousands of devotees thronged to Khiram Shareef and Kabamarg shrines to say prayers. The local Auqaf committees, Waqf board and administration had made elaborate arrangements for the devotees in Anantnag,
DC Anantnag Mohammad Younus Malik said the day passed peacefully and devotees in huge numbers thronged to all major shrines of the district including Baghi Nowgam Anantnag where religious clergy Abdul Rashid Dawoodi lead the prayers.
The speakers during and post Friday prayers threw light on the holy life of Prophet (SAW) and prayed for the unity of Ummah. Various religious and social organizations organized Seerat programmes and took out Milad processions at many places.
Hurriyat Conference also held a seminar on Thursday where the speakers highlighted various aspects of the life and teachings of Prophet Muhammad (SAW).
State Chief Minister Mehbooba Mufti, leaders from the pro-freedom camp and mainstream parties greeted people on the occasion.
According to reports Biggest Milad Rally of Jammu and Kashmir werr organized by Karwan-i-Islami Jammu and kashmir from Shaheed Gung Srinagar to Shadipora Sumbal in which More than One Lakh Devotees Participated and Head of party Moulana Sheikh Ghulam Rasool Hami delivered a speech and explained the importance of Milad-un-Nabi (S) and Unity among Muslims.

Another largest rally led by Anjuman-e-Sharie Shian Jammu and Kashmir under the leadership of Hojatul Islam Wal Muslimeen Aga Syed Hassan Almosavi from Bota Kadal to Khanqah Mir Shamsdin Araqi (R.A) Zadibal in which thousands including men,women,youths and girls attended the march of Milad and Unity.