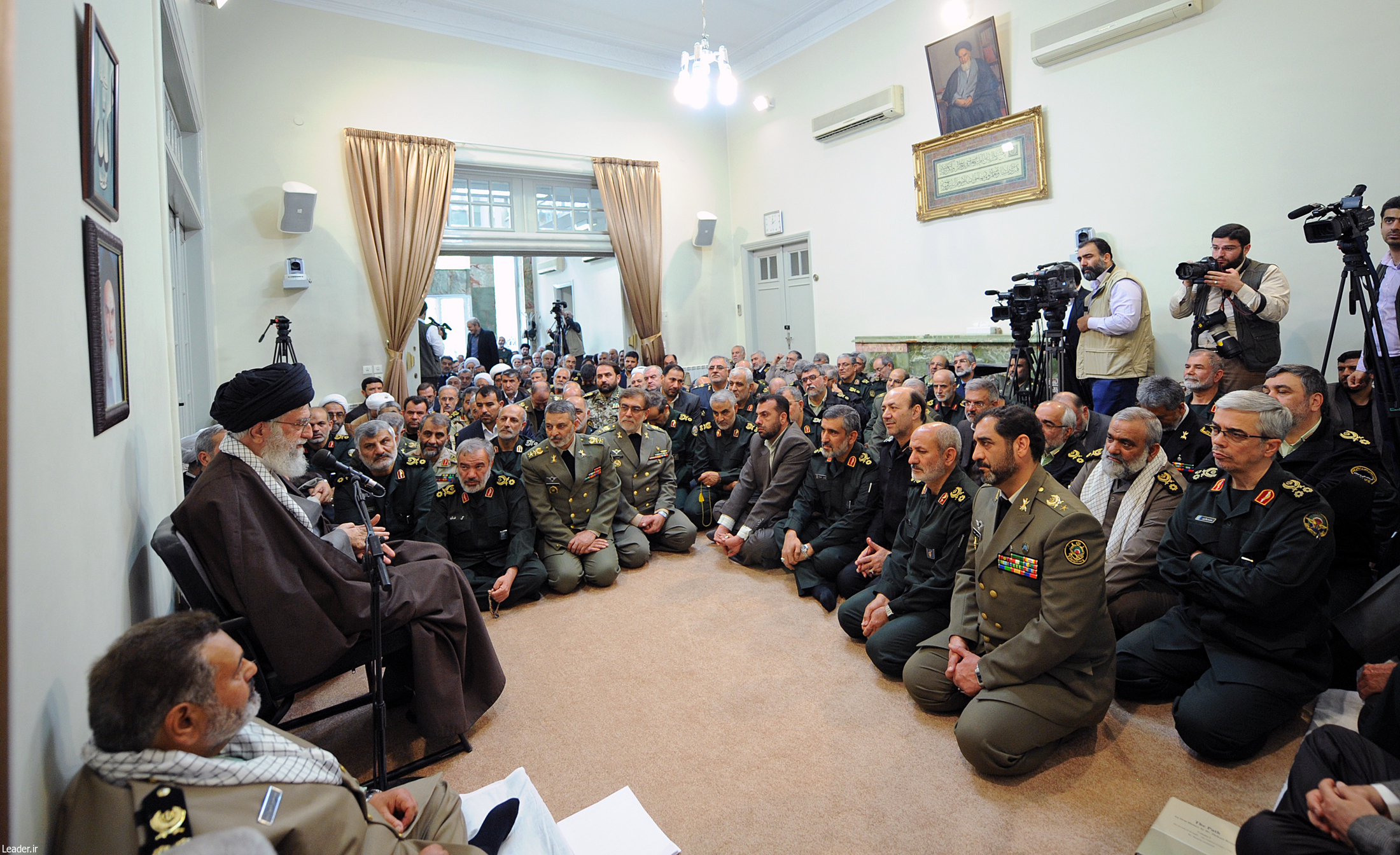 Military might, spirituality go hand in hand:Leader of Muslim Ummah

Tehran/Leader of the Islamic Revolution Ayatollah Seyyed Ali Khamenei, in a meeting with senior commanders of the Iranian Armed Forces on Sunday, said the most important characteristic of the “collective identity” of the Armed Forces of the Islamic Republic of Iran is their concurrent endowment with “operational and military capability” as well as “spiritual and religious motivations and orientations.”

Ayatollah Khamenei emphasized: “In the Islamic Republic establishment, the main task of the Armed Forces is to defend boundaries of the national security; [and] therefore, the operational capability and spiritual motivations of these forces must be upgraded on a daily basis.”

Ayatollah Khamenei referred to the existence of two groups of armed forces with two specific identities in most countries of the world, saying: “In certain countries, the army is a military force, which is ceremonial, decorative and for mere show without any operational capacity and is only meant for safeguarding government and [ensuring] security of rulers.”

“There are armies of this kind in our region as well, which some of them have invaded Yemen with full force since more than a year ago and have targeted the people in this country with their barrage of attacks, but they have failed to achieve anything,” said the Leader of the Islamic Revolution.

Ayatollah Khamenei referred to the second group of armies in the world, saying: “These armies pretend to enjoy a high operational and military capability, but in the battlefield, their agenda is limited to pure militarism and irrationality and ruthlessness.”

The Leader of the Islamic Revolution described the performance of the US Army in Iraq and Afghanistan as a clear example of armies with pure militaristic identity, saying: “If such armed forces run short of options in the battlefield, they will not shy away from recruiting professional criminal forces like the ‘Blackwater’ [mercenaries].”

The Leader of the Islamic Revolution stressed: “The only armed force in the world, which is both follower [of the Islamic] ‘school of thought’ and has spiritual motivations while being ‘efficacious’ and is acting in a country with ‘political independence’ is the Armed Forces of the Islamic Republic of Iran.”

“Militarism in the Islamic Republic of Iran is neither a ceremonial and decorative position nor an unrestrained, illogical, inconsiderate and aimless operation,” Ayatollah Khamenei noted.

Emphasizing that the unique identity of the Iranian Armed Forces must be continuously bolstered, the Leader of the Islamic Revolution added: “The Armed Forces do not belong to a specific person or specific party and faction, but belong to the whole nation and country and must be a safe fortress for people and protector of national and public security.”

“By upgrading the operational capability of the Armed Forces, which consists of organization, equipment, training and logistics, along with enhancing spiritual capabilities, which go beyond religious obligations and recommendations and must be created in the depth of the heart of the [armed] forces, the Armed Forces will feel really strong,” said the Leader of the Islamic Revolution.

Prior to Ayatollah Khamenei’s remarks, Chief of Staff of Iran’s Armed Forces Major General Hassan Firouzabadi presented a report on the activities and plans of the Iranian Armed Forces, saying: “The Armed Forces feel obligated to increase their military and deterrence power, particularly by upgrading their arsenal of ballistic missiles and developing missile bases in a bid to defend the sanctuary of the pure Islam and ensure the security of the nation and [the country’s] borders, and on this basis, we believe that under the present circumstances staging military maneuvers is imperative and [such maneuvers] will continue.”

Before the meeting, the noon and afternoon prayers were led by Ayatollah Khamenei.