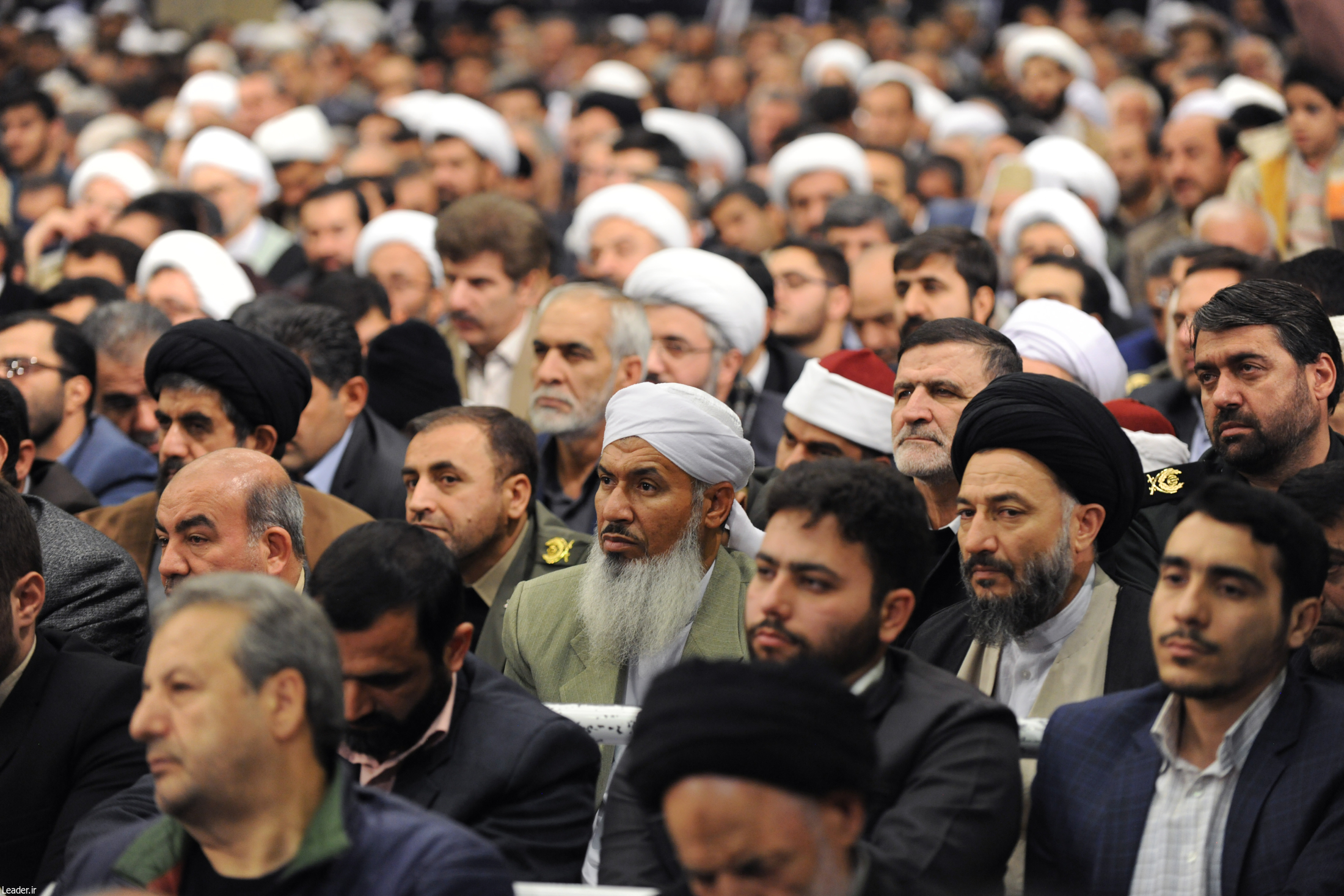 Muslims have to unite to end sufferings:Supreme Leader

Tehran:The Leader of the Islamic Revolution Ayatollah Seyyed Ali Khamenei met with high-ranking Iranian officials, participants in the 30th international Islamic unity conference in Tehran, ambassadors of Islamic countries and people from different walks of life on Saturday. During the meeting, the Leader said, “Today, there are two kinds of determinations in conflict with each other in the region, [which include] the “determination for unity,” and the “determination for division.” Ayatollah Khamenei added that under such sensitive conditions “reliance on the Quran and the divine teachings of the Grand Prophet [of Islam] (PBUH),” as the best way to forge unity among Muslims, could put an end to the suffering of the Islamic world.
The Leader of the Islamic Revolution congratulated the audience on the birth anniversary of Prophet Mohammad (PBUH) and Imam Ja’far Sadeq [the sixth Shia Imam] (PBUH), noting, “The sacred being of the Prophet of Islam (PBUH) is so important that the Almighty God puts the entire humanity under obligation because of this unique bounty.”
Citing the Quranic description of Prophet Mohammad (PBUH) as a “bounty for all humanity,” Ayatollah Khamenei stated that the teachings of the Grand Prophet of Islam opened a way for the salvation of the entire humanity and added, “The enemies of humanity and those with money and power are opposed to these blissful teachings and for this reason, God had ordered the Prophet to avoid following and compromising with infidels and hypocrites and engage in Jihad with them and be tough on them.”

The Leader added, “Of course, depending on different conditions, the Jihad against the enemies of Islam and humanity is sometimes military, sometimes political and at other times [it may be] cultural or even scientific and Muslim nations, especially religious preachers and youths, must study and know the divine teachings of the Last Prophet (PBUH) in order to be able to take advantage of this vital collection.”
The Leader of the Islamic Revolution then pointed to increasing efforts by the world arrogance and colonialist powers to sow division and weaken the power of Muslims, saying, “Today, the Islamic world is afflicted with numerous tribulations and pains, the solution for which is ‘unity, synergism, cooperation and overcoming religious and intellectual differences under the aegis of many Islamic commonalities’.”
Ayatollah Khamenei went on to note that if Islamic nations and governments were united, Americans and Zionists would not be able to impose their demands on Muslims and the conspiracy for causing the issue of Palestine to be forgotten would fail.
The Leader said assaults on and massacre of Muslims from Myanmar in East Asia to Nigeria in West Africa as well as confrontations among Muslims in the very important West Asia region were results of divisive conspiracies of arrogant powers, adding, “Under these conditions and circumstances, the British-style Shiism and the American-style Sunnism are busy stoking unrest and creating discord like two blades of a pair of scissors.”

Referring to the faceoff between the devil determination that seeks division and the dignifying determination that seeks to promote unity, the Leader of the Islamic Revolution said, “The age-old policy of the British, which is based on ‘divide and rule’, is now on the serious agenda of the enemies of Islam.”
Ayatollah Khamenei mentioned the policies and measure taken by the British officials during the past two centuries as a source of evil and misery for regional nations and pointed out, “During recent days, the British [officials] have quite brazenly called the oppressed and dear Iran a threat to the region, but everybody knows that to the contrary of such accusations, it is the British that have been always the origin and source of threat, corruption, risk and misery.”
The Leader of the Islamic Revolution mentioned the rise in anti-Islam activities of arrogant powers following the victory of the Islamic Revolution in Iran as a sign of their fear of the establishment and continuation of a powerful Islamic establishment, which can be a pioneer and role model. The Leader added, “The enemies, even when they claim to be soft-mannered and have a desirable countenance, are in the depth of their nature wild and violent and nations must be ready for the encounter with these vile, irreligious, and unjust enemies.”

Ayatollah Khamenei described “unity” as the most important field of readiness needed by the Islamic world and added, “All Islamic sects, both Shias and Sunnis, must avoid sowing discord and take the valuable being of the Prophet, the Holy Quran and the Noble Ka’aba as the axis of unity and solidarity.”
The Leader of the Islamic Revolution then called for more vigilance of nations and governments in the face of mischiefs by hegemonic powers and added, “Why some countries, which are apparently Islamic, accept what the enemies say about internal threats and hostilities in the Islamic world and clearly follow their policies?”
Concluding his remarks, the Leader addressed the “dear and tested nation of Iran” and noted that “the continuation of the proud path of the [late] Imam [Khomeini] and the revolution,” “steadfastness in the face of the enemies,” and “unrelenting defense of the right and truth,” would undoubtedly bring dignity and bliss to Muslims both in this world and the afterworld.
Before the remarks by the Leader of the Islamic Revolution, Iran’s President Hassan Rouhani described the noble and illuminated birth anniversary of the Prophet of Islam (PBUH) as the day for inviting people to what is right and all moral virtues and added, “The way of the Venerable Prophet [of Islam] (PBUH) was not to choose the middle way between the right and wrong, but when it came to choosing the right, he chose the best path and this is the real meaning of moderation.”

Emphasizing the need to achieve material and spiritual progress in parallel, the Iranian president said, “Today, enthusiasm of the country’s youths for spirituality and their vivid presence in spiritual arenas is more than the past and with regard to material advances, as reported by the Central Bank, the country’s economic growth has reached 7.4 percent during the first six months of the current [Iranian calendar] year.”
Rouhani also touched upon the situation in the region and while noting that some groups and currents have tarnished the image of religion with terrorism and violence in the name of the Prophet of Mercy (PBUH), added, “The Islamic Republic of Iran has always stood by the oppressed nations of the region against terrorism and will continue to do so.”
The Iranian president then took to task some Islamic governments that are worried and upset about the achievements of the people and armed forces in Iraq and Syria in their fight against terrorism, adding, “Unfortunately, instead of being concerned about the oppressed people of Syria as well as women and children and the injured and homeless people in [the Syrian city of] Aleppo, some Islamic governments are concerned about the fate of terrorists and are seeking their safe exit from Aleppo.”
Rouhani described fighting oppression and aggression as the way of the Venerable Prophet of Islam (PBUH) and said, “Divergence among Islamic countries blocks their way to grandeur and progress and the sole way to save the Islamic world is through convergence and unity.”
At the end of the meeting, a group of participants in the 30th international Islamic unity conference met with the Leader of the Islamic Revolution in person.