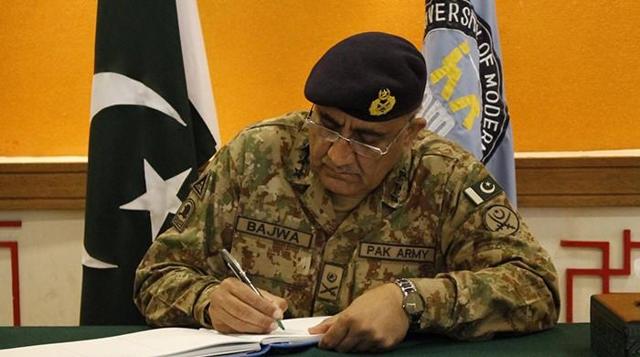 Islamabad:General Raheel Sharif is due to step down next week as as Pakistan’s Chief of Army Staff when his three-year term expires on November 29.

In his place, Lieutenant-General Qamar Javed Bajwa has been appointed in a rather smooth transition in accordance with the constitution.

The change of guard is being seen as an unusually amicable one given that Pakistan’s military has played a prominent role in the country’s politics since its independence in 1947, staging three coups.

Bajwa’s appointment also comes at a crucial time when relations between India and Pakistan are tense along the Kashmir border.

In Pakistan, under the constitution, the prime minister is head of the country’s executive, but the army controls domestic security affairs, the spy agency [the Directorate-General for Inter-Services Intelligence, better known as ISI] and the defence and foreign policies.

The announcement on Saturday by Nawaz Sharif, the Pakistan prime minister, is being described by analysts as an act that places Pakistan’s civil-military relationship on a firm footing.

“General Bajwa, whom I have met a few times, is someone who will not interfere a lot in the civilian government matters,” Lieutenant-General (retd) Talat Masood, a defence analyst, told Al Jazeera.

“He will indeed give his advice on certain things but will not dominate the political scene, which will prove to be very helpful in terms of relationship with the government.”

Bajwa was chosen over at least three contenders: Lieutenant-General Zubair Hayat, the army’s chief of general staff, who was previously responsible for the security of the country’s nuclear programme; Lieutenant-General Ishfaq Nadeem, the commander of II Corps, Multan, who was viewed by many as the favourite for the job; and Lieutenant-General Javed Iqbal Ramday, Bahawalpur Corps Commander.

Bajwa’s current designation is Inspector General (Training and Evaluation) at the general headquarters (GHQ) of the Pakistan army, a position Raheel also held before he became the chief of army staff.

Bajwa was the general officer in command (GoC) of X Corps, Rawalpindi, the army’s largest, which is responsible for the area along the Line of Control (LoC), the de facto border dividing Indian and Pakistani-administered Kashmir, has extensive experience in handling affairs in the region and the northern areas.

With cross-border shelling along the LoC that began in September showing no sign of ebbing, Bajwa’s military colleagues told Al Jazeera there is a likelihood that he would try to arrange a ceasefire between the two sides.

Lieutenant-Colonel (retd) Muhammad Irfan, who served with Bajwa in 1984 in the Northern Light Infantry (NLI) unit, which has the primary ground operations responsibility of protecting the northern areas of Pakistan, said Bajwa will “fight back with full force if the attacks from the other side of the border do not stop”.

“India is the one attacking our soldiers, killing civilians too, at the LoC. [Indians] are taking the heat, not us. So if India does not agree to the conditions of a ceasefire or ceasefire at all, I think Bajwa is someone who will take rapid action against it.”

In 2007, Bajwa served with a UN mission in the Democratic Republic of Congo as a brigade commander alongside Bikram Singh, an Indian general who was also there as a division commander before going on to become his country’s army chief.

Ranjeet Rai, an Indian defence expert, has been quoted by the New Indian Express daily as saying: “[Bajwa] takes over when a mortar war is going on between India and Pakistan along the international border and along the LoC.

“Now, he has two options: He can either stop terrorism or control the mortar firing from Pakistan or will he continue the old army chief’s policies.

“He will definitely carry General Sharif’s legacy forward and the decisions he has taken to fight terrorism in the country. He is indeed a firm opponent of extremism and terrorism.”

Pakistan’s Dawn newspaper reported that Bajwa may prove even more forceful in the fight against armed groups than Raheel Sharif, who is credited with launching Operation Zarb-e-Azb in an effort to wipe out the groups and their bases in the North Waziristan.

Cleary, Bajwa will have his plate full, from the tension with India and the violence in Afghanistan to growing links between homegrown armed groups and the implications of a Donald Trump presidency.

“There will be some minor differences here and there” between what Bajwa has done so far and will do as the chief of army staff, Masood, the defence analyst, told Al Jazeera.

“However, we all know he has a very brilliant record of service.”