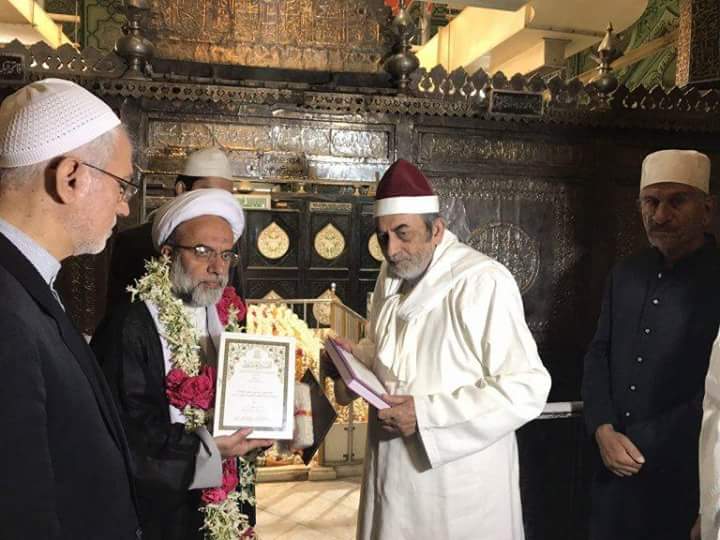 Representative of Supreme Leader visited the Dargah of Khawaja Banda Nawaz in Karnataka.

The Sufi mystic personalities have played a vital role in developing the relations between India and Iran, said representative of Ayatollah Khamenai, Aqai Mehdi Mahadavipoor at the inaugural function of the 613th Urs anniversary of Khwaja Banda Nawaz (Gesu Daraz).

Khwaja Banda Nawaz was a great Mystic personality of GulBargah, said Mahadavipoor addressing the gathering at the event. Khwaja was expired on 16 Zilqadah 825 which is 31 October 1422. His Dargah is the centre of attraction for all Muslims where millions of Muslims from all over India gather for pilgrimage.

The exchange of mystic personalities, poets and Sufi saints between India and Iran has resulted in development of culture, spirituality and relations between the two countries, said Mahadavipoor.

Khwaja Bande Nawaz Dargah was a Saint of the Chishti order (Sufi order) and preached valuable philosophies of tolerance and harmony. After the death of noted Sufi Saint Hazrat Nassiudin Chirag Dehalvi, his disciple Khwaja Banda Nawaz famously known as Gaisu Daraz became his successor. In his time Timur attacked Delhi due to which Gaisu Daraz moved to Daulatabad, taking the Chishti order down to South. Bahamani sultan Taj-ud-Din Firuz Shah invited him to Gulbarga at where he finally settled.

Khwaja Bande Nawaz expired at the age of 101.People from all faiths especially Muslims visit the Dargah of Khwaja Bande Nawaz to celebrate ‘urs’ (death anniversary) of the Saint, which is on the 15th, 16th and 17th day of Zul-Qa’dah as per Islamic calendar.