Rallies Held Across Kashmir For The Immediate Freedom Of Sheikh Zakzaky

Srinagar:City Reportor WT:Protest rallies were organized in Kashmir on Friday against the continued illegal detention and deteriorating health of Leader of Nigeria and IMN founder Sheikh Ibrahim El Zakzaky.

The Kashmir based religious organizations held a protest rallies in many parts of valley against the continued illegal detention and deteriorating health of Sheikh Ibrahim El Zakzaky. Protesters were carrying banners, placards and demanding the release of a Nigerian Islamic cleric, who has been in custody since December 2015.

City Reportor says, A silent protest was organized by Majme Islami Kashmir attended by “Scholars and Students” at Press Colony Srinagar condemned the Nigerian rulers’ behavior toward the Sheikh Zakzaky and his supportors, describing their behavior as ‘barbaric. Scholars called upon international community to take serious action against the brutalities of the Nigerian rulers. Among those who attended the rally were Moulana Ghulam Mohammad Gulzar, Moulana Bashir Ahmad Bhat, Moulana Ghulam Hussain Mattoo and many others.

On the Sidelines of protest m Shia-Sunni Members of Rehmat-ul-Lil-Aalameen Foundation were holding banners and placard for the support of Sheikh Zakzaky.

A Protest rally was organized by Itehadul Muslimeen Jammu and Kashmir at Chattabal Sringar of Kashmir. Senior Hurriyat Leader and President JKIM Moulana Masroor Abbas Ansari termed the illegal detention of Sheikh Zakzaky as the conspiracy of Zionist policy and also to suppress the voices of Nigeria. He demanded immediate release of Nigeria cleric and urged Islamic countries to shun their silence.

A Grand protest march was organized by J&K Anjuman-e-Sharie Shian led by Aga Syed Hassan Almosavi Alsafvi at Central Kashmir of Budgam which was joined by thousands of people demanding immediate release of Sheikh Ibrahim Zakzaky and his followers. 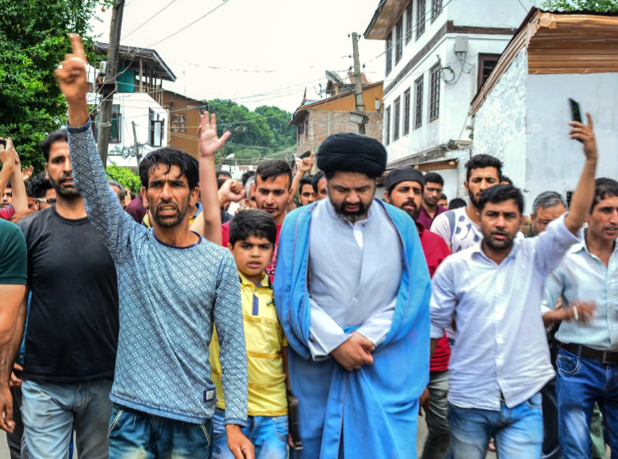 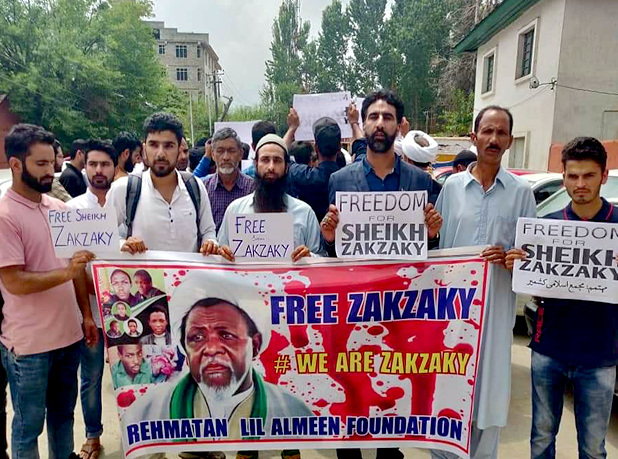 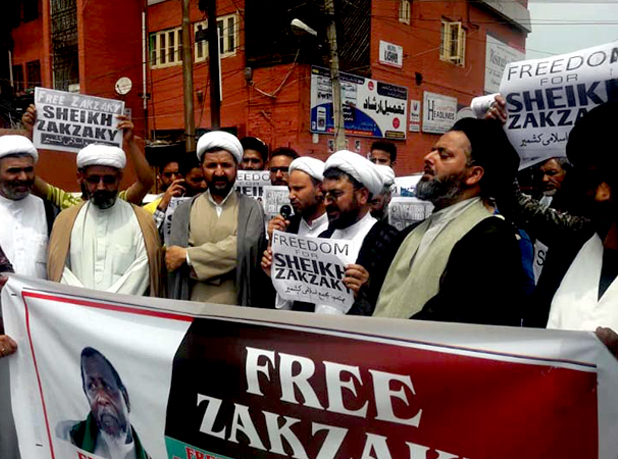 Protesters were carrying pictures of Shieikh Zakzaky’s as well as those who were murdered by the Nigerian government force.

While Speaking over the protest rally, Senior Hurriyat Leader and President J&K Anjuman-e-Sharie Shian Aga Syed Hassan urged the Muslim countries to break silence and launch an international campaign against the ruling government of Nigeria.

Referring to Zakzaky as the “leader of oppressed people of Nigerian,” Aga Syed Hassan insisted that the 66-year-old cleric was innocent but kept behind bars without having access to medical treatment. Doctors concluded that Sheikh Zakzaky is at risk of death unless he is urgently treated. With the necessary treatment not being available in Nigeria, recommended that he be flown outside the country to a reputable medical centre.

Moreover protest rallies were organized by Anjuman-e-Sharie Shian at Hassanbad Srinagar and Magam against the illegal detention of IMN Leader.

Sheikh Ibrahim El Zakzaky is the founder and head of the Islamic Movement of Nigeria (IMN). He launched the movement in the 1980s against imperialistic powers and  policies of local regime. He is being supported by Christians as well as Muslims across Nigeria and fully raised the voice for the freedom of Palestine.

In December 2015, the Nigerian Army raided his residence in Zaria, seriously injured him and his wife, he lost six of his sons and thousands of his followers. Since then, he has remained under detention in the nation’s capital, Abuja. He was ordered to be released by a federal high court in late 2016. The army simply ignored the order.