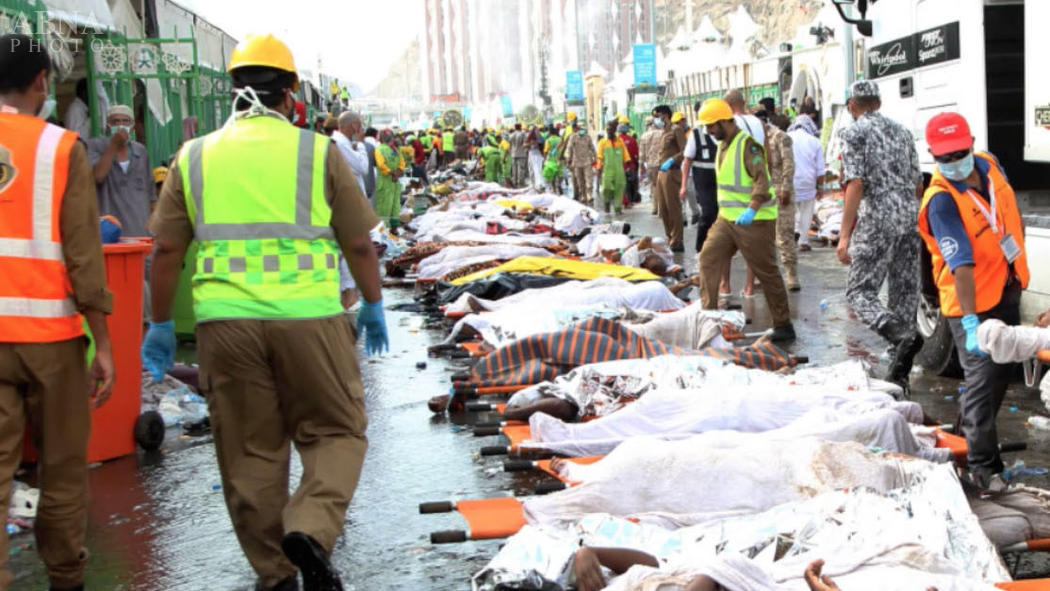 Ahlul Bayt News Agency - Informed authorities from some countries such as Iran, India and Pakistan say the death toll from last week's stampede near the Muslim holy city of Mecca has climbed to 4,500. At least 1,500 pilgrims were injured in the crush.

Ahlul Bayt News Agency – Informed authorities from some countries such as Iran, India and Pakistan say the death toll from last week’s stampede near the Muslim holy city of Mecca has climbed to 4,500. At least 1,500 pilgrims were injured in the crush.

An estimated 2 million people are undertaking the traditional hajj pilgrimage. Reuters, citing Saudi state television, reported that the stampede took place in Mina, a tent city located approximately three miles east of Mecca itself. The area is on the main road from the center of Mecca to the Hill of Arafat, revered by Muslims as the place where Prophet Muhammad gave his farewell sermon to Muslims who had accompanied him to Mecca near the end of his life.

It was the second major disaster during this year’s hajj season, raising questions about the adequacy of measures put in place by Saudi authorities to ensure the safety of the roughly 2 million Muslims taking part in the pilgrimage. A crane collapse in Mecca nearly two weeks earlier left 111 people dead.

Photos released by eyewitnesses showed Saudi rescue workers in orange and yellow vests were too apathetic to help the wounded pilgrims.

Many of the victims were crushed and trampled to death as they were on their way to perform a symbolic stoning of the devil by throwing pebbles against three stone columns in Mina.

Some survivors interviewed by The AP and other media said the disaster began when one wave of pilgrims found themselves heading into a mass of people going in another direction.

“I saw someone trip over someone in a wheelchair and several people tripping over him. People were climbing over one another just to breathe,” said one of the survivors, Abdullah Lotfy, 44, from Egypt. “It was like a wave. You go forward and suddenly you go back.”

Lotfy said that having two flows of pilgrims interacting in this way should never have happened. “There was no preparation. What happened was more than they were ready for,” he said of the Saudi authorities.

King Salman ordered the creation of a committee to investigate the incident.

The Interior ministry’s spokesman, Maj. Gen. Mansour al-Turki, said high temperatures and the fatigue of the pilgrims may also have been factors in the disaster. He said there was no indication that authorities were to blame for the event, adding that “unfortunately, these incidents happen in a moment.”

Another survivor, Ismail Hamba, 58, from Nigeria, recalled falling down and then being trampled over by marching pilgrims. “It was terrible, it was really, really terrible,” he said.

Another survivor, Hamid Shaker Nijad, from Iran said: It was around 8 AM. We were in Mash’arul Haram, a place between Arafat and Mina. We were in our way to Mina but after a while the crowd stopped and didn’t move anymore; all people were standing shoulder to shoulder so we were not able to move forward or backward. There was a deplorable condition, no water and no oxygen to breathe.

Maybe around 30 minutes; but if you were here you would understand that you can’t stand a quarter under this weather in usual condition. The weather here is too hot so it is not even easy for you to walk and in this horrible condition the time going for you very slow.

Gradually a wave of fear began to rise in all people; we were feeling the fear of death. At first we were thinking that the way should be open soon, but there were high pressures on our chests and we have no oxygen to breath. Fear of death had caused some pilgrims to show certain reactions; some of them were shouting and trying to escape. There was no way. We were so near to death so we made ourselves ready to die. All the people were in this condition but some of them could control themselves and the other couldn’t.

Yes, I saw how people being trampled underfoot in the crowd. There was no place to fall; so by falling of the first person, many people fell on him. I saw someone who was so crushed and all his stomach and intestines had spilled out. Certainly it was Saudi’s fault; they caused this tragedy by blocking the ways. They also did nothing for saving us for 3 or4 hours. We had no water; if there was a quick medical care the number of victims could never reached this huge amount.

It was terrible; very very terrible; they put live people and the dead on each other. They were carrying the corpses and the wounded people by trucks because there were not enough ambulances!!!

Thursday’s tragedy struck during a morning surge of pilgrims at the intersection of streets 204 and 223 as the faithful were making their way toward a large structure overlooking the columns, according to the civil defense directorate.

The multi-story structure, known as Jamarat Bridge, is designed to ease the pressure of the crowds and prevent pilgrims from being trampled.

After three to four hours, ambulance sirens blared and helicopters hovered overhead as rescue crews (about 20 to 30 years old) slowly and without previous preparation rushed the injured to nearby hospitals.

Many videos shared on social media showed horrific scenes, with scores of bodies — the men dressed in the simple terry cloth garments worn during hajj — lying along a sunbaked street.

Survivors assessed the scene from the top of roadside stalls near white tents as rescue workers in orange and yellow vests were apathetic.

International media covering the hajj, including The Associated Press journalists in Mina, were restricted from visiting the site of the accident for several hours and some of them arrested and still missing for taking video and photos of what really happened there.

The tragedy is certain to have touched many different countries as the victims likely included pilgrims of different nationalities.

Sudanese pilgrim Mahmoun Mahmoud, 55, witnessed what he said appeared to be pilgrims from many different countries.

At least 227 Iranian pilgrims dead and 150 were injured in Thursday’s crush, according to the official IRNA news agency. The chief of the Iranian hajj organizing agency, Saeed Ohadi, blamed Saudi Arabia for “safety errors” and said in comments to Iranian state TV that “mismanagement by the Saudis” led to the tragedy.

About 55 Egyptian nationals died according to initial reports and Egypt’s hajj delegation executive president, Maj. Gen. Sayed Maher, said over 50 were injured in the deadly stampede.

The United States expressed its “deepest condolences” for the victims of the “heartbreaking stampede” outside Mecca. National Security Council spokesman Ned Price said the U.S. joins in mourning for “the tragic loss of these faithful pilgrims.”

The U.N. Secretary-General Ban Ki-moon was “deeply saddened” to hear of the deaths, his spokesman said in a statement.