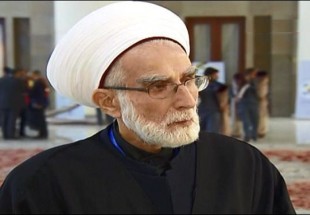 Sheikh Ahmad al Zein, head of the society of scholars in Lebanon, extended his condolences over the martyrdom anniversary of Imam Hussein (AS), third Shia Imam, saying that Ashura aimed at defending Islamic ideologies and the holy Qur’an, reported Taqrib News Agency (TNA).

He said,” Ashura has undecover lessons of sacrifice. It is in fact a school where knowledge and culture are fully manifested.”

Head judge of Sidon also noted Ashura as the day when the message of Islam in institutionalizing true Islam and avoiding religious prejudices as well as boosting Islamic proximity are perfectly shown.

Highlighting other messages of Ashura as a turning point in the history of Islam, Sheikh Ahmad al Zein, stressed the increasing demand of the people for occasions like Ashura that have the highest capacity for boosting unity among Muslims.

Lebanese cleric referred to the affection of all Islamic denominations for Ahlul Bayt (AS), household of Prophet Mohammad (PBUH), and stressed necessity of all Muslims to be liberated from the intrigues calling Ashura as an important axis for the objective.

Ashura is the tenth day of Muharram, first month of Muslim lunar year, and the martyrdom anniversary of Imam Hussein (AS), third Shia Imam and grandson of Prophet Mohammad (PBUH), who was beheaded beside his 72 warrior companions in the battle of Karbala back in 61 AH.