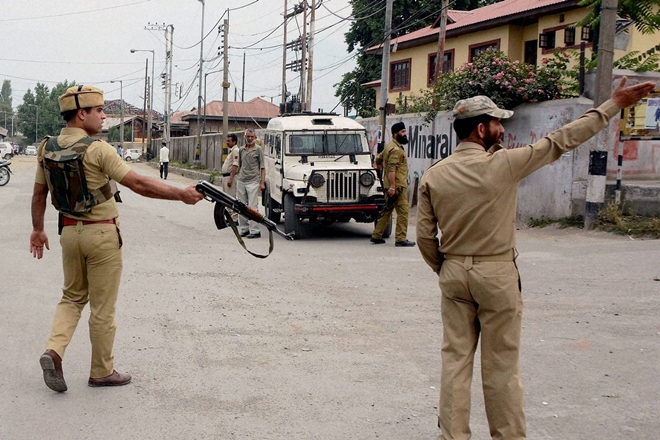 New Delhi: The Supreme Court today adjourned hearing on a batch of pleas challenging the constitutional validity of Article 35-A, which gives special rights and privileges to people of Jammu and Kashmir, saying its three-judge bench has been hearing the case and will consider whether it has to be referred to a larger bench.

A bench comprising Chief Justice Dipak Misra and Justice A M Khanwilkar said the matter has to be heard by a three-judge bench and Justice D Y Chandrachud, who is also a part of the bench, was not present.

The apex court has listed the matter for hearing in the week commencing August 27.CJI Misra observed that the apex court has to consider whether Article 35-A goes against the basic structure of the Constitution.Article 35-A, which was incorporated in the Constitution by a 1954 Presidential Order, accords special rights and privileges to the citizens of Jammu and Kashmir and denies property rights to a woman who marries a person from outside the state.
The provision, which leads to such women from the state forfeiting their rights over property, also applies to their heirs.

“A three-judge bench will consider whether it has to go before a Constitution bench.”

The Jammu and Kashmir government had on August 3 moved the apex court seeking adjournment of today’s hearing on petitions challenging the validity of Article 35-A, citing the upcoming local body elections.

During the hearing today, the counsel appearing for the petitioners challenging the validity of Article 35-A opposed the move by the state government seeking adjournment of the matter.

Several interlocutory petitions have been filed in support of Article 35-A by various individuals and civil society groups seeking continuance of the special status to Jammu and Kashmir.

Four petitions demanding scrapping of the provision have been moved before the Supreme Court. The main petition was filed by a Delhi-based NGO “We the Citizens”.