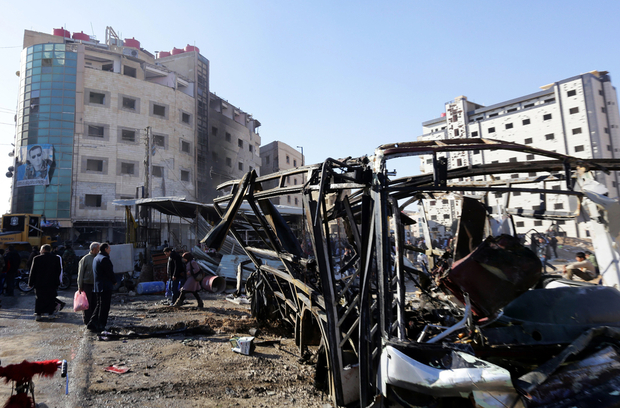 Damascus:Only a few hours after deadly blasts rocked the capital Damascus, Syria called for immediate action against Turkey, Saudi Arabia, and Qatar, who it claims support and finance terrorism.

Earlier in day, at least 20 people died and dozens of others sustained injuries when a bomber blew up his explosives at the entrance of the holy shrine of Hazrat Zaynab (Peace be upon her) in the capital’s suburbs.

It was followed by a second blast when an explosive-laden car parked on the nearby al-Tin street went off shortly afterwards.

Daesh have hit the area at least three times this year, killing or injuring scores of people.

On Friday, Takfiri terrorists killed nearly 40 civilians in a bloody attack on a village in the strategic northern province of Aleppo.

The ministry noted that such attacks are aimed at boosting the morale among the terrorists, who have suffered dramatic collapse in their ranks following a recent surge of military gains by the Syrian forces and their allies.

The Syrian army and allied forces on Friday wrested control of a strategic crossroads leading to the northern city of Raqqah, the Daesh Takfiri terror group’s main stronghold.

Separately, the Syrian Democratic Forces (SDF), a coalition of Kurdish and Arab fighters, are moving towards Manbij, another city in Raqqah province near the Turkish border.

The letters also stressed that Syria will continue with its push against terrorism and efforts to protect the nation against the Takfiri threat.

Syrians look at a burnt out vehicle used in a double bombing attack on June 11, 2016. (AFP)

It added that such blasts, massacres, and attacks carried out by Daesh and other terrorist groups operating in the country are all within the political framework of Turkish President Recep Tayyip Erdogan’s government with the financial and military support of Doha and Riyadh.

Meanwhile the Damascus attacks were condemned by UN chief Ban who said those behind the attacks “must be held accountable.” In a statement, Ban offered his deepest “condolences to the bereaved families and the Government of Syria.”

Saudi Arabia and Turkey, along with other allies including Qatar, have time and again been implicated in providing financial and logistical support for the Takfiris in an effort to bring down the Syrian government.

Syria has been gripped by foreign-backed militancy since March 2011. The United Nations special envoy for Syria, Staffan de Mistura, estimates that over 400,000 people have been killed in the conflict.