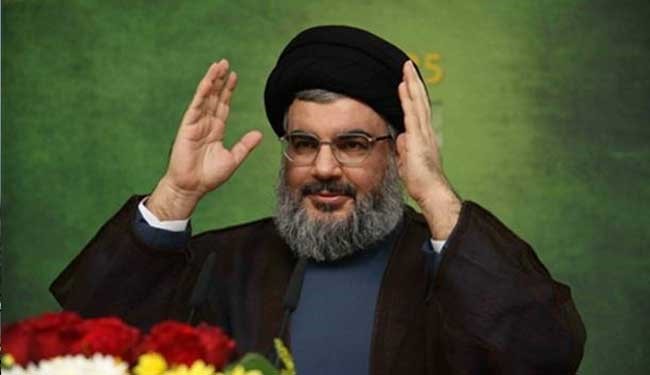 Takfiri terrorism does not belong to Islam:Sayyed Hassan Nasrallah

Syria’s future must be decided by Syrians themselves

Beirut:The secretary general of the Lebanese Hezbollah resistance movement says Takfiri militants perpetrating heinous crimes across the Middle East and North Africa have no connection to Islam and the religion’s most revered figure Prophet Muhmamd (PBUH).

Addressing his supporters via a video link from the Lebanese capital city of Beirut, Seyyed Hassan Nasrallah stated that efforts to tarnish the image of Islam have entered a new phase, stressing that all Muslims bear the responsibility of denouncing the atrocities and make it known to the international community that the crimes are not linked to Islam.

He stated that the ideology behind extremism stems from Wahhabism, and that Wahhabis have turned a blind eye to the critical issues of Muslims, particularly the Palestinian cause.

Nasrallah went on to say that Muslims worldwide must denounce the barbarism of Wahhabi extremists, and that no religion or ideology agrees to the ferociousness of the Takfiri Daesh terrorist group.

The Hezbollah chief further condemned attempts to link Daesh or any other terrorist group to Islam, terming such bids as part of a scenario against the divine religion.

He criticized the Turkish government for its double standards vis-à-vis the fight against terrorism, calling on Turkish officials to adopt a clear stance regarding Daesh.

Turning to the liberation of Aleppo and return of the strategic Syrian city to full government control, Nasrallah termed the development as one of the greatest achievements in the battle against Takfiri terrorists.

“The support offered by Arab states to militants in Syria over the past six years goes beyond the level of assistance provided to Palestinians in sixty years,” the Hezbollah secretary venereal said.

He said the militants’ defeat in Syria is the result of sacrifices by the Syrian nation, army as well as resistance fighters.

Nasrallah also criticized Western and some Arab media outlets over broadcasting fabricated stories on ongoing development in Aleppo, saying the networks are misleading the world public opinion by showing fake images the aftermath of Syrian army operations in Aleppo.

“Media outlets are showing images of Yemeni children, and then claiming they are pictures of Syrian kids,” he said.

Nasrallah said Syrian government forces allowed the evacuation of foreign-backed Takfiri militants from eastern Aleppo at while the so-called “moderate” opposition fighters do not agree to civilians’ exit from areas under their control.

“Terrorist groups have not accepted a single deal to allow aid to reach Syrian civilians,” the Hezbollah chief said.

He described the Aleppo liberation as a big victory and a major development on political and military levels, saying that the United States is blocking a political solution in Syria.

“Syria’s future must be decided by Syrians themselves,” Nasrallah pointed out.

Nasrallah also welcomed the formation of a new government in Lebanon, stating that the new administration must address all issues in the Arab country and not merely suffice to the duties listed in the electoral law.

He vehemently dismissed allegations that Hezbollah seeks to take control of all institutions in Lebanon, emphasizing that the resistance movement only wants to ensure that the new Lebanese government represents people from all walks of life.