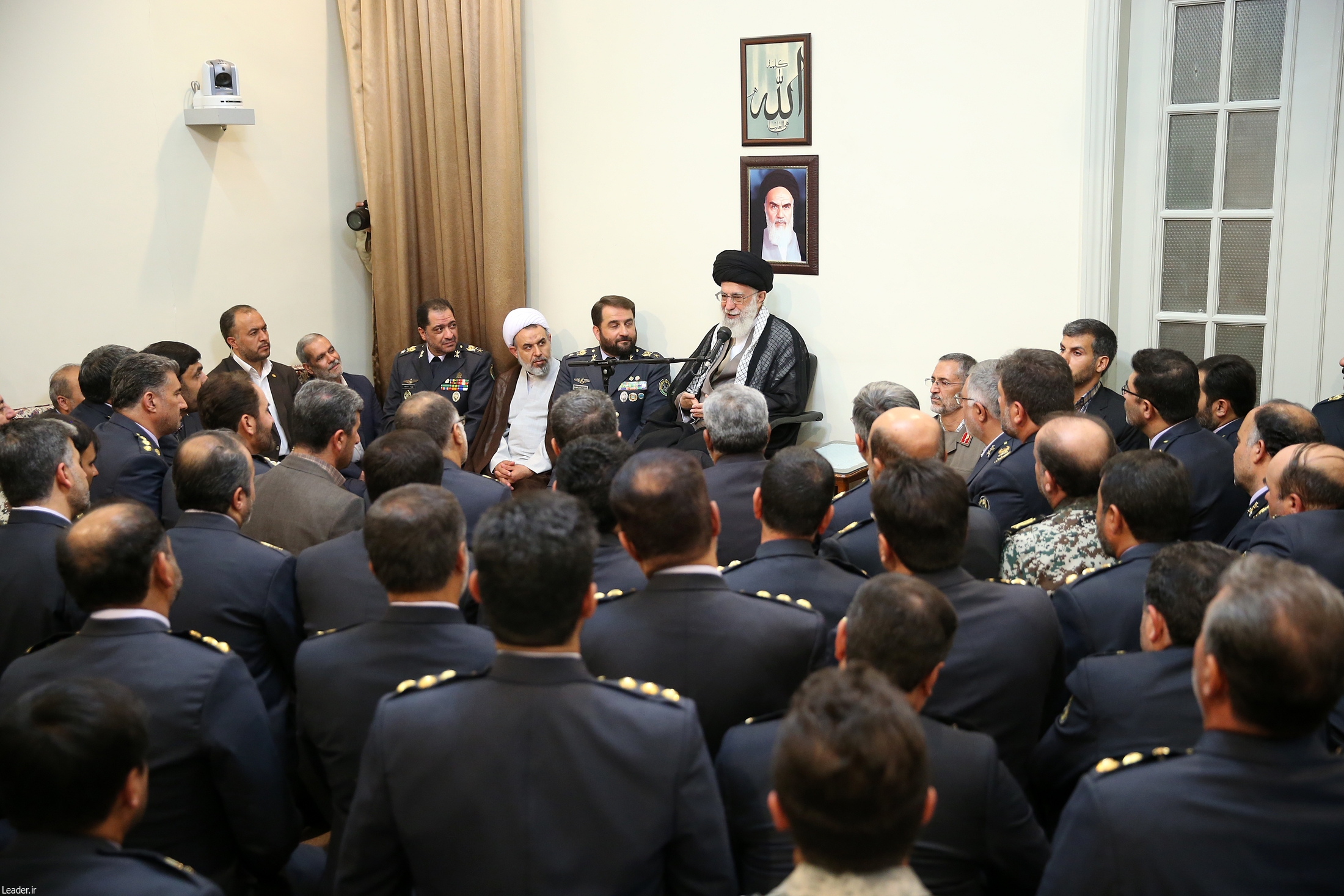 Tehran:Leader of the Islamic Revolution Ayatollah Seyyed Ali Khamenei, in a meeting on Sunday with commanders and staff of the Islamic Republic of Iran Army’s Khatam al-Anbia Air Defense Headquarters, underscored the significance of defense as “the frontline of countering any aggression”, describing the front opposing the Islamic Republic as an “infamous, deceitful” one “opposed to the nation’s independence”. “In countering this enemy, which seeks to undermine the country’s defense might, the Armed Forces’ [level of] preparedness must be upgraded such that the enemy would not even dare considering aggression [against Iran],” said Ayatollah Khamenei.

According to Desk report of “Wilayat Times” Ayatollah Khamenei said the “resolve, will and capability of manpower” constituted an important factor in removing obstacles and weaknesses, adding: “The Khatam Headquarters is among the main frontlines and by appreciating this important opportunity and by showing determination, willpower and firmness, undermine the enemy’s determination for [potential] aggression.”

The Leader of the Islamic Revolution said the issue of enmity with the Iranian nation and the Islamic establishment was beyond certain common hostilities in the world, noting: “The front opposing us, which we refer to with descriptions like ‘hegemonic system’ or ‘global Zionism’, is an infamous and deceitful one with unjust plots, which is hostile to the very principle of the Iranian nation’s religious beliefs, independence and [its] refusal to bow to bullying.”
Referring to the fact that this enmity in the arrogant front is manifested in different forms, Ayatollah Khamenei added: “This enmity surfaces one day in the form of the regime of the United States of America and another day in the face of an oppressive regime like [former Iraqi dictator] Saddam [Hussein’s], but the important thing is that we must adopt the correct stance and decision and put it into practice by benefiting from the abundant potentialities and capacities of the country and knowing the enemy’s position and planning.”

Ayatollah Khamenei said the widespread opposition and media hype against the S-300 missile defense system or the fortified Fordo nuclear facility were examples of the wickedness of the enemy of the Iranian nation, adding: “The S-300 system is a defensive and not offensive tool, but the Americans tried their best to deny the Islamic republic this facility.”

“We are faced with such enmity that does not recognize the right of defense for our nation and is, in fact, saying ‘Remain defenseless so that we will invade your country anytime we want’,” said the Leader of the Islamic Revolution.

Ayatollah Khamenei, who is also the commander-in-chief of the Iranian Armed Forces, also laid emphasis on vigilance, timely action and application of diverse methods and sophisticated tools in air defense, saying: “The enemy must understand that if it invades [us], it will receive a strong blow and our defense will also include a response [to the enemy].”

Prior to Ayatollah Khamenei’s remarks, Brigadier General Farzad Esmaeili, commander of Khatam al-Anbia Air Defense Headquarters, commemorated the 8th anniversary of the establishment of the air base and presented a report on the most important measures taken there.