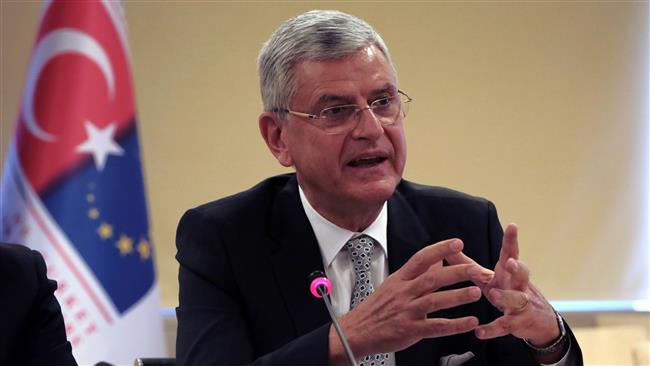 Turkey says it will not make changes to its terrorism laws required under a controversial deal with the European Union (EU) aimed at stemming the flow of refugees to Europe.

“It is not possible for us to accept any changes to the counter-terrorism law,” Volkan Bozkir, Turkey’s minister for EU affairs, told the Turkish NTV broadcaster on Wednesday.

Turkey’s current terrorism law already meets the EU’s standards and there had been no agreement to reform the legislation in exchange for visa-free travel for Turkish citizens in Europe’s passport-free Schengen area, Bozkir added.

Turkey and the European Union sealed a contentious deal in March, under which the 28-nation bloc will take in thousands of Syrian refugees directly from the country and in return will reward Ankara with money, visa exemption and progress in its EU membership negotiations.

Turkey is required to meet 72 conditions, one of them narrowing its legal definition of terrorism, to gain visa liberalization for its 79 million Turkish nationals to the Schengen zone.

The minister’s remarks echoed those last week by Turkish President Recep Tayyip Erdogan, who told the EU, “We’re going our way, you go yours.”

Ankara:The European Parliament has begun debates on a proposal by the European Commission, the executive body of the EU, to grant Turkey the visa waiver.

Burhan Kuzu, a lawmaker and an adviser to Erdogan, warned on Tuesday that if the European Parliament makes the “wrong decision,” Ankara “will send the refugees” back to Europe.

In another relevant development on Wednesday, Spanish Foreign Minister Jose Manuel Garcia-Margallo described the EU deal with Turkey as a “botched job,” criticizing Europe’s “inadequate” response to the refugee crisis.

German Interior Minister Thomas de Maiziere also threatened that Turkey won’t get the visa liberalization if it fails to comply with the 72 criteria EU has set for it.

Europe is facing an unprecedented influx of refugees who are fleeing conflict-ridden zones in Africa and the Middle East, particularly Syria.

Many blame major European powers for the unprecedented exodus, saying their policies have led to a surge in terrorism and war in the violence-hit regions, forcing more people out of their homes.