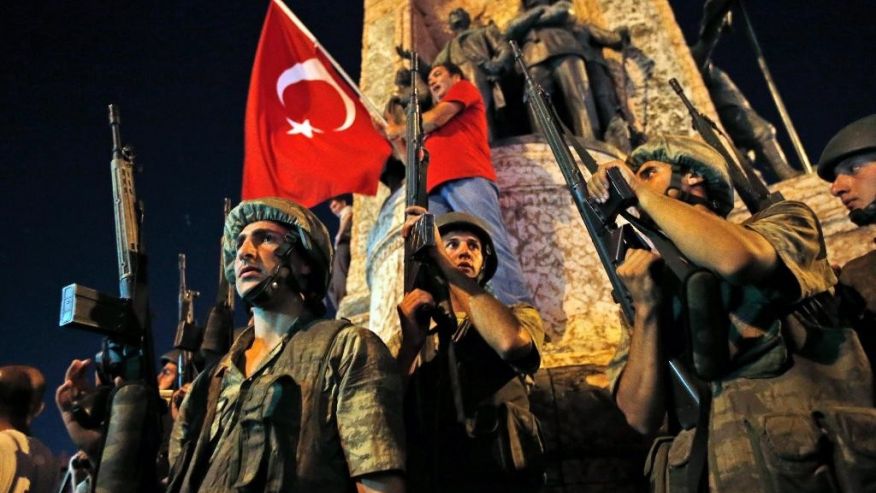 Ankara:An army group in Turkey says it has taken over the country, with soldiers at strategic points in Istanbul and jets flying low in the capital, Ankara.

A statement read on TV said a “peace council” now ran the country and there was a curfew and martial law.

It is unclear who the group is or its level of support. Some top army officials are said to be detained.

President Recep Tayyip Erdogan said he would overcome what he called an uprising by a minority.

Reports are coming of two explosions at parliament building in Ankara.

People across Turkey are very confused and surprised, the BBC’s Katy Watson in Istanbul says.

In Washington, US President Barack Obama urged all parties in Turkey to support the “democratically elected government”.

Mr Erdogan told CNN Turk by mobile phone the action was by a “parallel structure” that would bring the necessary response. He has used this term in the past to refer to Fethullah Gulen, a US-based Muslim cleric he accuses of fomenting unrest.

Mr Erdogan called on people to take to the streets to oppose the uprising.

He said: “I urge the Turkish people to convene at public squares and airports. I never believed in a power higher than the power of the people.”

Mr Erdogan said he was on his way to Ankara and those involved in the action would pay a heavy price. His office said he was in a secure location.

Reports earlier on Friday said the president was on holiday in the south-western resort of Marmaris.

Defying the announced curfew, a number of Erdogan supporters later turned out on Istanbul’s central Taksim Square as reports of the attempted coup emerged.

There have since been reports of clashes there, with some on Twitter saying that gunfire has been heard near the square.

PM Binali Yildirim had earlier denounced an “illegal action” by a military “group”, stressing it was not a coup. He said that the government remained in charge.

The military group’s statement on national broadcaster TRT, read by an announcer, said that democratic and secular rule of law had been eroded by the current government. There would be new constitution, it said.

A Turkish presidential source told Reuters news agency that the statement was not authorised by the army’s command.

There are reports Turkey’s top general, General Hulusi Akar, is among those taken hostage at the military HQ.

Mr Yildirim told NTV by telephone: “There was an illegal act by a group within the military that was acting out of the chain of military command. Our people should know that we will not allow any activity that would harm democracy.”

Traffic has been stopped from crossing both the Bosphorus and Fatih Sultan Mehmet bridges in Istanbul.

There are reports of gunshots and at least one loud explosion in the capital Ankara. Other reports said soldiers were inside buildings of the Turkish state broadcaster in Ankara.

One European Union source told Reuters that the military action “looks like a relatively well-orchestrated coup by a substantial body of the military, not just a few colonels”.

Visiting Moscow, US Secretary of State John Kerry said he hoped for peace and “continuity” in Turkey.