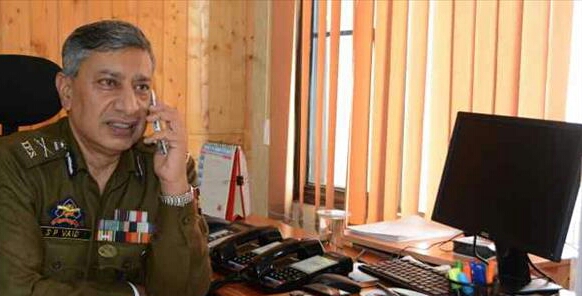 Violence has only brought miseries to people in J&K:DGP

Jammu: Jammu and Kashmir Police has drawn a new roadmap for restoration of peace in the State. Disclosing this during a brief conversation with The local based Magazine namely “Kashmir Magazine”, Director General Police Dr. S P Vaid said that from now onwards Police will serve as a link between the people and the government and is not averse to any democratic peaceful political activity by the separatists.

Announcing that separatists are most welcome to undertake any peaceful political activity but police won’t allow them to disturb peace anywhere in the State, the DGP in reply to a question on rumors about the revival of unrest like situation in April this year, said “I have also heard about this but I would like to advise people not to fall in the trap of those working on the dictations of the people on the other side of the border. Violence has only brought miseries to people but is not a solution to any problem. Last year also children lost education, properties were devastated, economy was shattered and tourism was badly hit and as such it would be better for people to help police create a congenial atmosphere for peace and development in the State. Those tending to trigger violence would be firmly dealt under law”.

Revealing that police will get the feedback about the inability of the government to deliver essential services at the door steps of people and pass on them to concerned departments for immediate appropriate actions, Vaid said the police community groups can share their grievances about power failures, delays in repairs of power transformers, health care facilities, school education and availability of essentials.

Ruling out any scope for lobbyism in police, DGP said “from the day I have taken the charge there is no lobbyism in police. We encourage performers and work collectively for peace and law enforcement. We are one”.

In reply to question on human rights violations, he said “Jammu and Kashmir police is working in a very difficult situation where other departments do their routine work but police faces angry protestors on the streets. I have asked police cadres not to use any force on law abiding citizens and deal firmly selectively with the trouble shooters only”.

In reply to a question on issue of accountability in Police department, DGP said “CCTVs will be installed at police stations to monitor the working in office chambers of SHOs, Munshis and Lockups”.