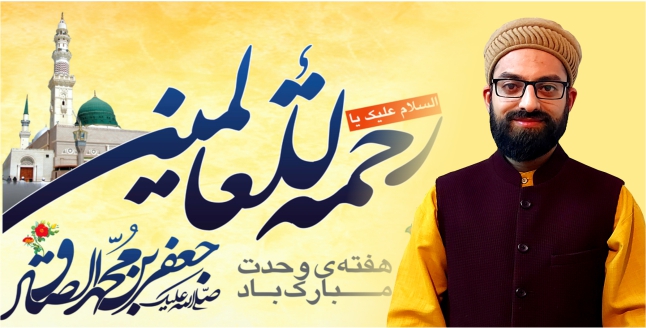 Waseem Reza Kashmiri:Muslims must unite to build God-fearing society with the morals of Holy Prophet (Pbuh))

Srinagar | WTNS | October 23:While greeting the Muslim Ummah on the auspicious Milad-un-Nabi (SAWW) and the coined term Haft-e-Wahdat, Waseem Reza Kashmiri emphasized to promote Islamic teachings for the formation of a society , based on human values. Moreover sans from all social drudgeries which only casts the satanic features in its orbital parameters by deviating the roads of straightforwardness beaconed by our Last Prophet (Pbuh) and taking a U-Turn embarking on western culture just to create the holocaust of cultural onslaughts.

Kashmiri Seminary Scholar says Formation of a humane- abstracted society by following the prism of our last Prophet’s “SAWW” teachings in order to suppress the diverse social hooking is the vehement call of the day .

Congregating the whole Muslim Ummah on the birth anniversary “ Divine Day”  of Hazrat Muhammad Mustafa (SAWW) , the sixth Imam Hazrat Imam-e-Jafar Sadiq (AS) and the week-long celebrations which are going on , Young Kashmiri Seminary Scholar at Al-Mustafa International University Howza Ilmia Qom Waseem Reza Kashmiri in a statement said that the Holy Prophet  is the blessing and a source of salvation not only for muslins but for the whole humanity.

We must play our roles to suppress and nip the causes of deadliest woes into the bud  which are lingering there constantly such as misery, depravity , misguiding , ignorance , lootings , immoralities and economical and political calamities . These evils can be flushed out by enabling ourselves to make complete prostrations in light of the divine book and under the surveillance of the holy Prophet “PBUH” and his progeny “AS”.

Muslims of the world are gifted with their crown “Hazrat Muhammad Mustafa ”SAWW ” Almighty Allah has declared all the muslins of the word to follow their Prophet  and should keep striving to be proved his true followers.

Waseem Raza said Allah, the Almighty, sent the seal of Prophets (SAWW) as the mercy and benevolence for the mankind. Therefore, every individual of the Ummah has a responsibility to carry the universal message of Islam to the world. He said that Islam is the most perfect religion and all sects are connected with this source so there is a need to forget the differences and use the commonalities.

Kashmiri Seminary Scholar termed the centuries old religious harmony of Kashmiri people as an example for the Muslims of the world to follow. He said that people of Kashmir ,whether Muslims or non Muslims live peacefully and we must not allow anyone to loosen this bond.

Urged youth to use their intelligence and insight as a weapon, An Alumni of Al-Mustafa(SAWW) International University Waseem Reza further said that the youth should use social networking sites in the right direction by becoming ambassadors and defenders of Islam in order to thwart the soft war and conspiracies started by the enemies and not provide an opportunity to become and knowing or unknowing tool of enemies.