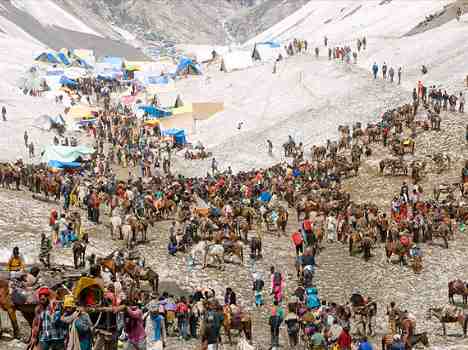 At least seven Hindu pilgrims, most of them women, have been killed in a gun battle that erupted in Indian-administrated Kashmir after suspected rebel fighters attacked a police vehicle, officials said.

The bus carrying more than 50 pilgrims came under attack on Monday evening as they were returning from a cave shrine in the Himalayas, police said.

Fourteen others were wounded when the vehicle got caught up in the cross fire near the southern Anantnag town, police officers speaking to news agencies on condition to anonymity said.

There was no immediate claim of responsibility for the attack.

The gunmen first attacked an armoured police vehicle, and the officers in the vehicle returned fire, a police statement said.

“Thereafter, the militants again fired at a police patrol in which a passenger bus was hit by bullets,” the statement said.

India’s Prime Minister Narendra Modi condemned the attack and tweeted that “India will never get bogged down by such cowardly attacks and the evil designs of hate”.

He also said his thoughts were with all those who lost loved ones in the attack.

“My prayers with the injured,” he tweeted.

Chief Minister J&K Mehbooba Mufti rushed to the spot and condemned the attack,termed it unhuman and Unislamic.

Three top separatist leaders, who challenge India’s sovereignty over Kashmir, strongly condemned the attack and expressed “deep sorrow and grief over the killings”.

The pilgrims were returning after paying obeisance at the shrine nestled in the Himalayas at a height of 4,115 metres when the attack occurred.

Meanwhile Militant outfit Lashkar-e-Toiba has condemned an attack on Amarnath pilgrims in south Kashmir’s Anantnag district, saying it is against the Islamic teachings.

LeT spokesman Dr Abdullah Ghaznavi said in a statement issued to news agency GNS that attack on Amarnath pilgrims is highly reprehensible act. “Islam does not allow violence against any faith. We strongly condemn such acts,” he said.
Ghaznavi said that “India wants to sabotage the freedom struggle of Kashmiris, therefore it uses such attacks to full fill its nefarious agenda” . “At times, India uses hindus of Uttar Pradesh to hide its terror face, and when it fails, they use false flag attacks against Amarnath Yatris,” he claimed.

About 100,000 pilgrims have already completed the journey to the Amarnath shrine that began late last month and is due to end in late August under tight security.Kashmir poeople warmly welcoming yatras and with great hospitality treating Yatras and tourists in Kashmir.