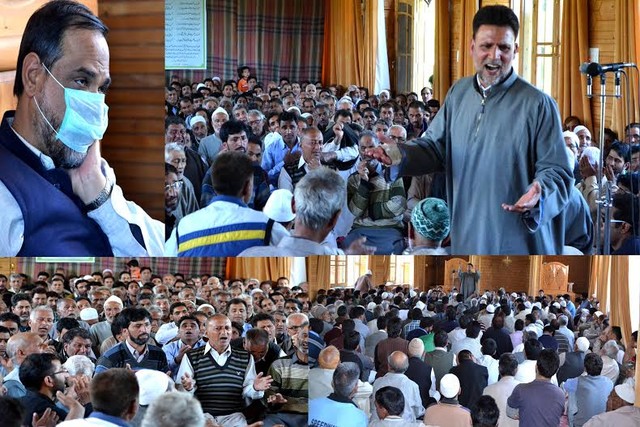 Srinagar: Rich tributes were paid to illustrious scholar and commentator of the Holy Quran,Maulana Mustafa Hussain Ansari on the 10th anniversary of his passing away on Sunday.
Majalis and commemorative services were held across Kashmir where speakers recalled the Maulana Mustafa’s tireless efforts in working for unity among Muslims and addressing misunderstandings between different schools of thoughts in Islam.

A grand congregation was held in Srinagar at Gulistan-e-Baba Mazar, the resting place of Maulana, in which thousands took part & day long mourning meeting were commemorated.

The ceremony started with the congregational Dua-e-Tawasul led by Agha Syed Aijaz Razvi.

Known for his forceful and penetrating discourse, Maulana Mustafa Ansari has scores of specialist treatises to his credit, including the first ever Kashmiri commentary of the Holy Quran in several volumes, and biographical  works on Prophet Muhammad (pbuh) and Imam Hussain (AS).

Having dedicated his life to scholarly pursuits, Maulana Mustafa was a highly sought-after figure in society at home and outside the state, and was often called in to defuse grave crises involving confrontations arising between sects due to misunderstandings.

A report from Iraq said a memorial service was held in the holy city of Najaf-al-Ashraf on Friday where late Maulana’s outstanding contribution to the cause of Islam as propounded by Ahlal-Bayt was highlighted. The function was held inside the holy shrine of Imam Ali (AS) and participants from various countries took part.