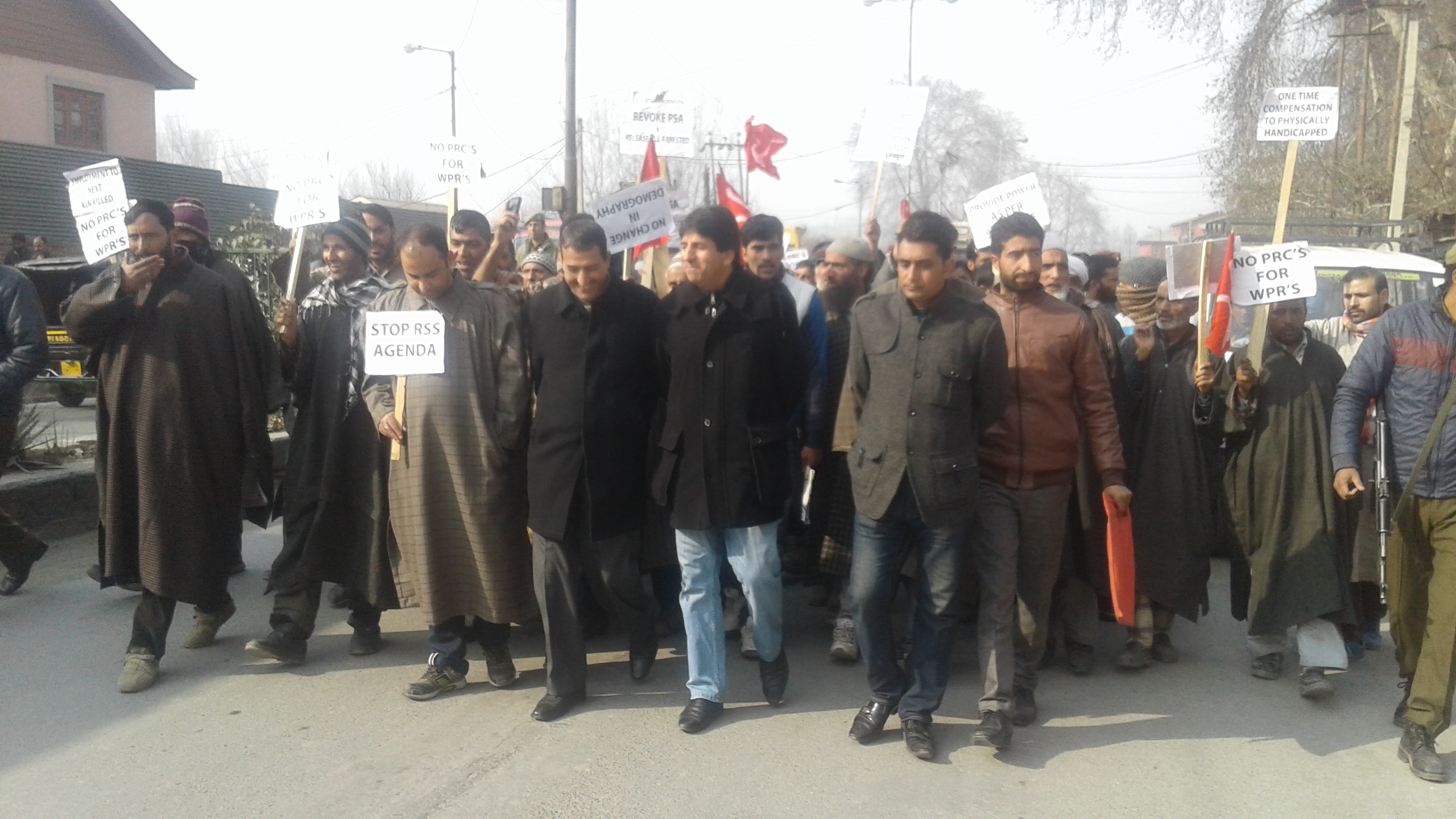 Srinagar:Senior National Conference leader and Member of legislative Council Dr Bashir Ahmad Veeri along with hundreds of party activists took out a protest rally in Anantnag against BJP-PDP led government.

Veeri, on the occasion threatened to launch valley wide agitation against anti-people policies of PDP-BJP government, if it failed to mitigate the problems faced by common masses and didn’t stop killing spree.

He demanded monthly remuneration/pension for victims blinded by pellets. “Government must bring out a special scheme for pellet victims and must start their sound monthly pension/remuneration besides it should also provide government employment to next of the kin killed & life time compensation to physically handicapped during the unrest,” he demanded.

“Mehbooba Mufti used to accuse us of killing people and Jailing innocents but now she broke all the records and in fact has traveled extra mile by blinding hundreds of educated youth,” he alleged.

“During elections Late Mufti asked people to vote for PDP for stopping BJP’s mission 44 but later they joined hands with RSS just for the sake of Chair despite ours unconditional support,” Veeri told gathering.

“Not a single Kashmiri especially youth is safe. Since PDP-BJP government took over the law and order situation has worsened,” Veeri said.

He said that people want the change that PDP promised during campaign campaign. “PDP-BJP alliance must fulfill all the promises mentioned in agenda of alliance,” he said.

‘Hadn’t PDP and BJP in agenda of alliance document agreed to facilitate dialogue between India and Pakistan,” he questioned.

He said that instead of taking concrete measures for resolution of Kashmir issue, PDP is complicating by issuing domicile certificates to West Pakistan refugees which is nothing but a sinister design of RSS to change the demography of Jammu Kashmir.

Dr Veeri slammed state government for its failure in providing essential services to people & expressed concern over the shortage of eatables and essentials in the state and said, “Situation is grim in the state; CAPD stores in Kashmir are empty. No adequate steps are being taken by this callous government in this regard despite knowing the fact that Kashmir most of time losses surface connection with rest of the world due to heavy snowfall.”

He threatened to launch valley wide agitation against anti-people policies of government in-case they continued to implement anti-people & anti kashmir agenda. “Today’s protest is to warn government. They must refrain from implementing RSS dictated, Nagpore agenda,” he added.