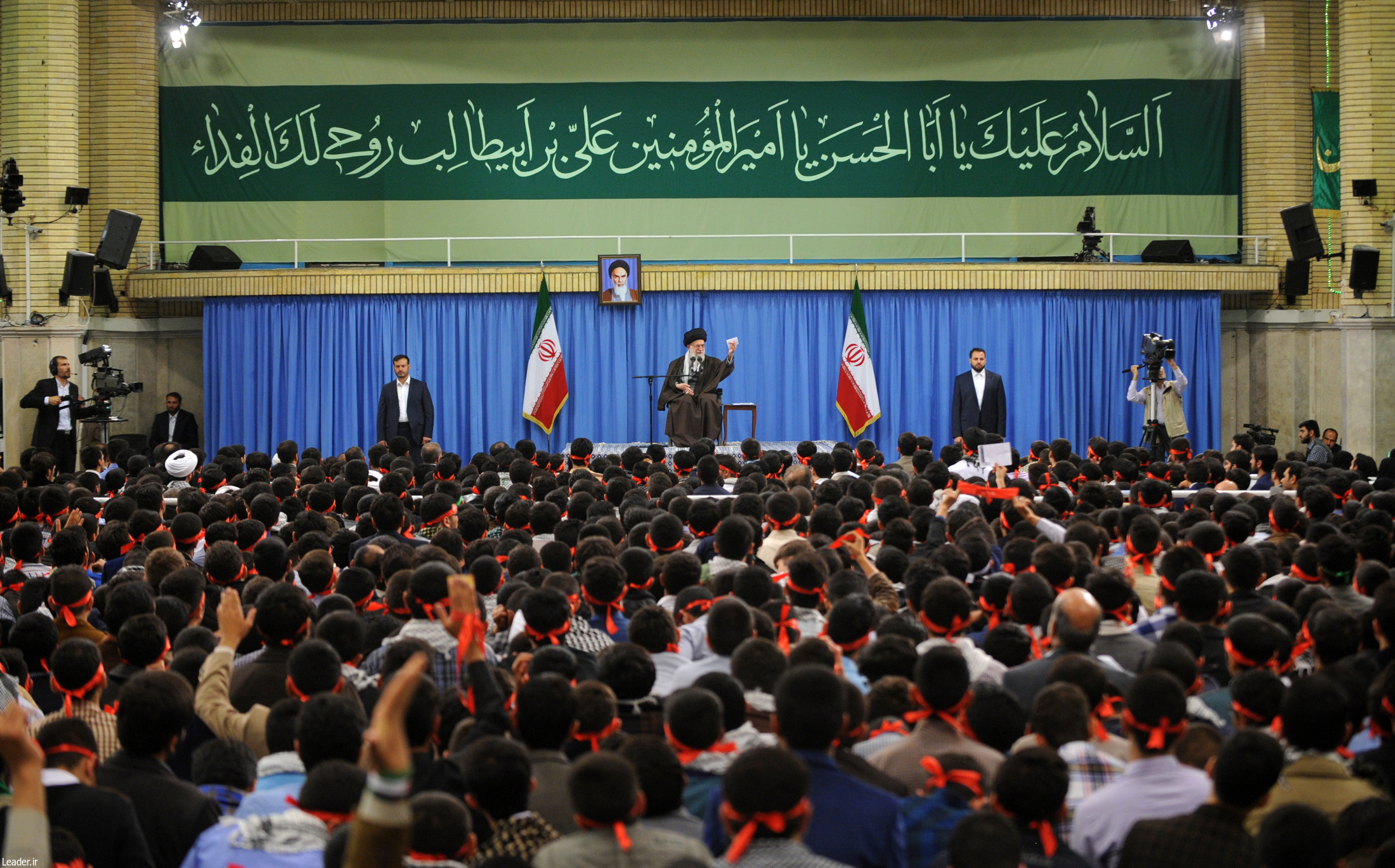 Tehran:Ayatollah Seyyed Ali Khamenei, the Leader of the Islamic Revolution, in a meeting on Wednesday with thousands of members of the Union of Islamic Pupils’ Associations  from across the country, said one of the major areas of confrontation between the Islamic Republic’s establishment and hegemonic powers is the domain of the youth, noting: “The front standing against the Islamic establishment is seeking to change the religious and revolutionary identity of Iranian youth, and deprive them of hope, joy and motivation, and the only way to tackle this covert and complicated confrontation lies in training ‘pious, revolutionary, honest, determined, vigilant, motivated, hopeful, thoughtful, courageous and devout’ youth as ‘soft war officers’.”

At the beginning of this meeting, the Leader of the Islamic Revolution recommended that youth benefit from the unique opportunity of the month of Rajab (on the lunar calendar) and then the months of Sha’ban and Ramadan that will follow. Ayatollah Khamenei said: “These three months are the ‘spring of spirituality’ and the youths who are in the spring of life can benefit from this priceless chance to bolster their spiritualism-oriented aspect.”

Ayatollah Khamenei went on to enumerate some battlefields in which the Islamic Republic’s establishment is engaged in combat with hegemonic powers led by the United States and Zionism, adding: “The country’s independence, including political, economic and cultural independence, is one of these fields because [world] powers will counter any country that tries to stand against the hegemony and influence of foreigners and defend its own independence.”

The Leader of the Islamic Revolution referred to the issue of progress as one of the sticking points between the Islamic establishment and hegemonic powers, saying: “Global powers stand against any country trying to achieve progress without leaning towards them because such progress will serve as a ‘model’ for other countries and nations.”

Ayatollah Khamenei said one of the most significant motives for arrogant powers to line up against Iran’s capability in acquiring nuclear knowledge was related to the aforementioned issue, stressing: “If we back down in the face of these powers, they will definitely expand their opposition to progress in other sectors of biotechnology, nano and other sensitive branches of science because they are opposed to any kind of scientific, economic and civilizational progress by the Islamic Republic of Iran.”

The Leader of the Islamic Revolution said “Iran’s strong presence in the West Asia region and the world”, “the issue of Palestine”, “the issue of resistance” and the “issue of Irano-Islamic lifestyle” are other bones of contention between hegemonic powers and the Islamic establishment, saying: “If in a country, Western lifestyle spreads the elites in such a society will turn into individuals who would be submissive to the policies of hegemonic powers.”

Ayatollah Khamenei also highlighted the issue of “youths” as one of the most important areas of discord, saying: “As far as the issue of youths is concerned, a covert but overarching soft war is under way between the Islamic Republic of Iran on the one hand and the US and Zionists and their followers on the other.”

The Leader of the Islamic Revolution said pupils and students were officers of this war, adding: “In this soft war, two kinds of officers with two different identifies could be imagined and the outcome of this war will differ depending on the identity of officers.”

Ayatollah Khamenei stressed that soft war is not less dangerous than hard war, and referring to some instances of ranting by enemies, the Leader of the Islamic Revolution said: “Sometimes they threaten us with hard war and bombing, but such remarks are bombastic rhetoric because they have neither a smoking gun nor the courage to do so and if they do so they will be delivered a punch in the mouth.”

Ayatollah Khamenei said a soft war is currently under way against the Islamic Republic and “we should also launch attacks and not merely remain on the defensive”, adding: “If we have pious, revolutionary, determined, industrious, thought-developing, courageous and devout officers in the headquarters and fortresses we can guess the outcome of such a battle.”

“But if in this soft war, the headquarters and fortresses are staffed by submissive, easily fooled, unmotivated and thoughtless youths who trust the enemy’s smile, do not care for their own and others’ fate and are preoccupied with instincts, the outcome of the battle is a foregone conclusion,” said the Leader of the Islamic Revolution.

The Leader of the Islamic Revolution noted that insisting on the “piety, honesty and faithfulness of youths” and “their refusal to get occupied with instincts” should not be interpreted as dogma and rigid-mindedness, saying: “The Westerners, particularly the Americans, want Iranian youths to be faithless, uncourageous, unmotivated, non-dynamic and hopeless elements who would be optimistic about their enemy and pessimistic about their commander and backup forces, but the Islamic establishment is seeking to train youths in the opposite direction of the desire of the hegemonic powers’ front.”

Ayatollah Khamenei strongly recommended that Islamic Pupils and Students’ Associations make endeavors to help train youths with a religious and revolutionary foundation and identity and promote such morale among their fellows, saying: “As we have long-term planning or the scientific and religious and revolutionary move of the country’s youths, the enemy also needs long-term planning and the way to counter it will be quantitative and qualitative expansion of revolutionary and pious youths as well as their resistance and steadfastness

The Leader of the Islamic Revolution went on to highlight the Iranian officials’ responsibilities towards youths, saying: “At schools, in addition to focusing on pupils’ courses, correct planning is needed to create the chance for promoting revolutionary activities, so that the young generation will grow up to be a revolutionary generation.”

Ayatollah Khamenei urged education officials to facilitate the maneuvering of revolutionary and pious associations like the Union of Islamic Pupils’ Associations and the Union of Basjii Pupils, adding: “It has been heard that at some schools revolutionary activities are opposed. The Education Ministry must tackle such an approach.”

The Leader of the Islamic Revolution described the environment of youths in the country as a “hope-inspiring” environment and said: “In spite of different factors of deviation and the extended front of enemies, currently in the country, we have pious and revolutionary youths who are accustomed to resorting [to God], who attend the Arbaeen march (held on the 40th day after the anniversary of the martyrdom of Imam Hussein, the third Shia imam), who are faithful to Quran, who observe itikaf (prayer in isolation) and who are steadfast in the battlefields of the revolution. We should be grateful to God Almighty for this.”

Ayatollah Khamenei described the existence of such youths in the country as very glorious and noting that after 37 years, the hegemonic powers’ front has failed to annihilate the Islamic Republic of Iran or block its growth and power in the region, said: “Despite abundant practical and propagandistic threats, Lebanon’s Hezbollah is showing off its power in the Muslim world and its condemnation in a torn piece of paper by a corrupt, dependent and empty government is of no significance.”

The Leader of the Islamic Revolution highlighted the Zionist regime of Israel’s defeat by Hezbollah of Lebanon during the 33-day war. Drawing a parallel between this victory and the defeat inflicted on the powerful armies of three Arab states by the Zionist regime, Ayatollah Khamenei said: “Hezbollah and its pious youths are shining like the Sun and they are a source of honor for the Muslim world.”

Ayatollah Khamenei said truth-oriented movements are growing in nature, adding: “The truth may face some hardships, but it will finally emerge victorious.”

The Leader of the Islamic Revolution said the main condition for the victory of truth is the resistance of soft war officers against problems, noting: “The truth belongs to youth and with God’s grace the day will come when problems will be resolved gradually and the youths will be at the top.”

Prior to Ayatollah Khamenei’s speech,  Haj Ali Akbari, who represents the Union of Islamic Pupils’ Associations, presented a report about the activities of this union, saying: “Today, our cause is to train pupils in line with the ideals of the Islamic Revolution and therefore revolutionary training, with reliance on Alevite teachings, tops our agenda.”

Meanwhile, two members of the Union of Islamic Pupils’ Associations expressed their views and concerns about the activities of students and issues related to education and training at schools.