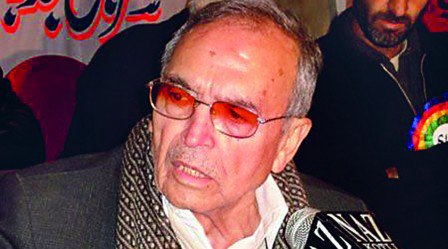 Srinagar:Jammu and Kashmir Liberation Front (JKLF) founder and supporter of armed struggle Amanullah Khan (86), who died at a Rawalpindi hospital in Pakistan on Tuesday.Separatists in the Kashmir Valley are preparing for mass funeral prayers at Lal Chowk on April 27 at 2 p.m.Pro Freedom leaders termed the demise of Amanuallah Khams’s as great loss and said that J&K has lost its most valiant son. Aman sahib was a pioneer of the struggle for the J&K’s independence. His persistence is an example.

Khan, also father-in-law of Peoples Conference chief Sajad Lone, founded the JKLF in 1977 in the United Kingdom. Khan is believed to have helped set up arms camps in Pakistan-occupied Kashmir in 1988. Khan’s U.S. visa was cancelled in 1990 and an Interpol Warrant of Arrest was issued against him.