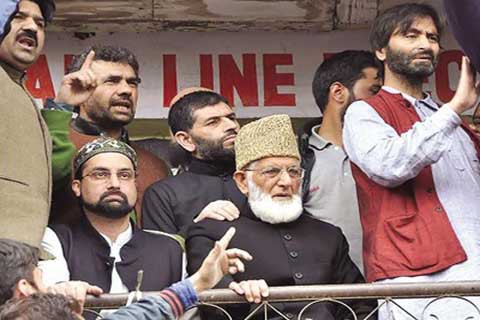 Terming the terroristic suicide attack in Lahore “a massacre of humanity”,Kashmiri Pro freedom and Pro Indian leaderscondemn the attack that claimed over 100 lives.

All Parties Hurriyat Conference (G) chairman Syed Ali Shah Geelani condemned the attack and asked Pakistan Prime Minister Nawaz Sharif to “identify the terrorists behind it and give them exemplary punishment.”

“Geelani called Pakistan High Commissioner in India Abdul Basit on phone and expressed his solidarity with the Pakistan government,” said a Hurriyat spokesperson in a statement.

Geelani said the attack has “shamed humanity and those involved in such type of terrorism cannot be called humans.”

“Even if they are hanged publicly, that would not be enough,” the spokesman quoted Geelani as saying.

He said Geelani has expressed solidarity with victim families and prayed for earlier recovery of injured.

“Targeting innocent people and children is barbaric. Whosoever is behind Lahore explosion doesn’t deserve to be called a human. They have no religion,” he said.

“We strongly condemn the attack that left many children dead,” he said, expressing sympathies with those who lost their dear ones in the attack.

“Barbaric attack in Lahore has pained every human heart and mind. The perpetrators of this attack cannot be termed as humans and part of a civilized world. Kashmiris condemn this heinous criminal attack and expresses their condolences with the bereaved families,” Malik said in a statement.

While terming the attack as an “attack on whole humanity”, Malik said attacking innocent people, children and women, “can only be termed as barbaric and inhuman and people who do these kinds of criminal acts can only be named savages.”

He said Islam and all other religions have clearly prohibited attacking innocents, children and women. “Even Islam teaches us to protect trees and greenery during war times.”

While expressing condolences to the bereaved families who lost their dear ones in Lahore attack, Malik said people of Kashmir stand by them. Meanwhile senior leaders & activists of JKLF stanged a protest against attack in Lahore.

In a statement, Shah termed the attack as “extreme form of brutality and barbarism.”

“The people of Jammu and Kashmir express their condolences and sympathies with the families of those whose kith and kin were martyred in the attack. Who better than Kashmiris can understand the plight of the affected families?”

Terming the attack as a “crime and challenge to humanity”, Shah said “such perpetrators can in no way be called humans” and “such acts are unacceptable.”

He said Pakistan government must rise to “eliminate terrorism that has plagued the country and teach a befitting lesson to the enemies.”

“It is a cowardly act of brutality that has claimed lives of innocents. My heart goes out to everyone who lost his loved one in the attack in Gulshan Iqbal Park. I share their pain and offer my deepest condolences,” Mir said in a statement here.

Tehreek-e-Mazahamat chairman Bilal Sidiqui said the perpetrators of this attack cannot be termed as humans.

Expressing profound grief and sorrow over the loss of lives, Dr. Farooq Abdullah and Omar prayed for peace to the departed souls and expressed their solidarity with their families. They also prayed for the complete and fast recovery of those who are injured.

“This is another senseless act of barbarism that underlines the need to unite against the common enemies of peace and humanity. My heart goes out to the affected people and I pray the situation improves and incidents like these are never repeated,” Dr. Farooq said in his message.

Omar said the loss of innocent lives in Lahore is a reminder of the challenges faced by innocent people across the world in fighting barbarism and violence. “I pray for those who have been affected and express my heartfelt solidarity with them,” he said.

Expressing deep grief and sorrow over the tragic loss of innocent lives at Gulshan Iqbal Park, Lahore, Mehbooba expressed solidarity with the bereaved families. She also prayed for early recovery of those injured in the gruesome attack.

“My heart goes out to the victims and their families and friends,” she said and added such senseless acts of violence underline the need for uniting against the enemies of peace and humanity. She said the perpetrators of this attack cannot be termed as humans and they can never be part of civilized world.