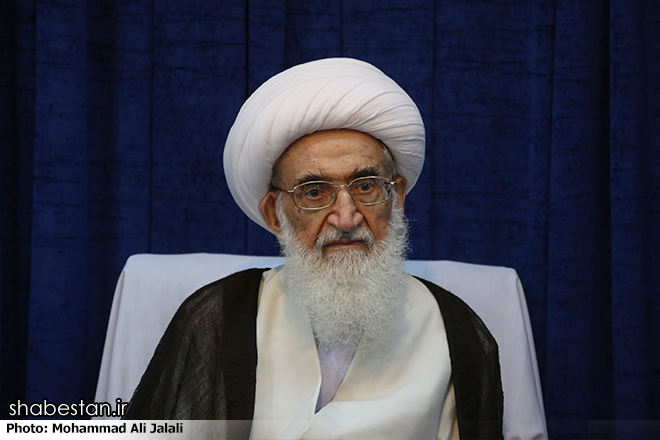 Tehran:Ayatollah Hussein Nouri Hamedani, a Shia source of emulation, received a group of Iranian police forces in his office in Qom, Iran on Tuesday.

At the beginning of the meeting, senior Shia cleric congratulated the crowd on 10 days of Dawn marking the 38th anniversary of Iran’s Islamic Revolution.

Ayatollah Nouri then pointed out the enemies’ attempts to isolate Muslim scholars and to undermine people’s religious beliefs and faith adding, “By looking at historic books one realizes that religion has long been the mainstay of Muslim scholars as they have built Islamic civilization based on the doctrine of Islam.”

The Shia source of emulation further stressed, “The late founder of the Iranian Islamic Revolution, Imam Khomeini (ra), used to emphasize the fact that Islam’s adversaries had not let people to know about the realities of Islam; for they had attempted for centuries to introduce Islam as a limited set of teachings for individual’s manners and behaviors. They tried to make people believe Islam is nothing but performing religious rituals like prayers or fasting during Ramadan, whereas Islam offers guidelines for all human and social aspects of life including issues such as culture, politics, economy, etc.”

Reiterating that knowing the enemy is one of the key elements of Islam, Ayatollah Nouri said, “We must be aware that enemies, particularly Saudi rulers, are always lurking to damage our religion.”

The senior scholar referred to Imperialism, arrogance and alliance with the Zionist regime as the essences of Western politicians’ ideology saying, “Such attributes suggest that maintaining a constructive and normal relationship with the West is simply not possible as the holy Quran has addressed them as the main enemies of Islam.”

Elsewhere in his remarks, Ayatollah Nouri Hamedani pointed to Donald Trump’s recent measure in ordering U.S. military readiness, reiterating that “We Iranians are not intimidated by such orders since our nation is raised by values such as jihad and martyrdom; Millions of people are ready to sacrifice their lives for the sake of Islam in case our supreme leader, Ayatollah Sayyed Ali Khamenei, asks them to do so.”