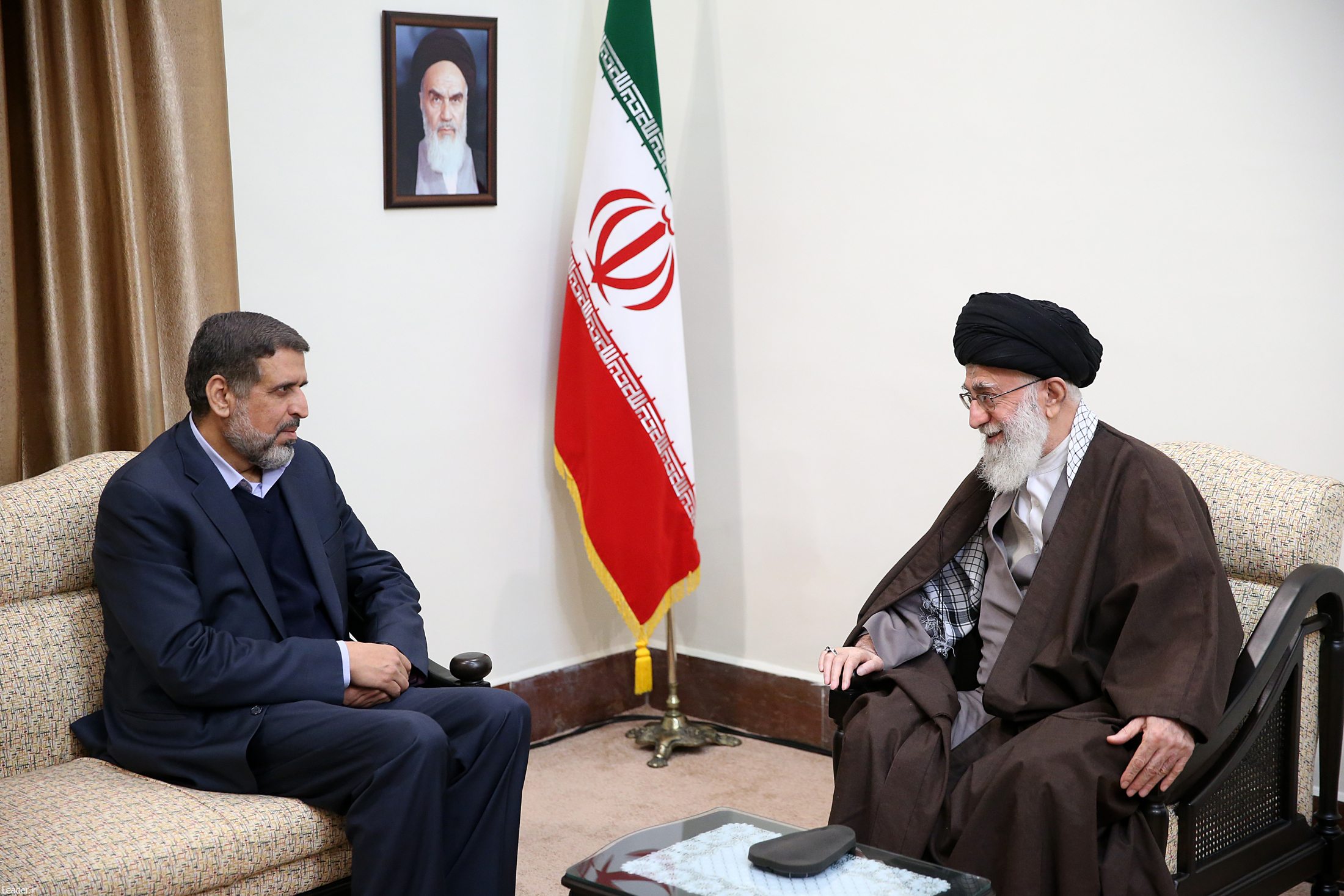 Tehran:In a meeting on Wednesday with visiting Secretary-General of the Islamic Jihad Movement in Palestine, Ramadan Abdullah and his accompanying delegation, Leader of the Islamic Revolution Ayatollah Seyyed Ali Khamenei said, “Despite an incessant creation of crises by supporters of the Zionist regime in order to make the issue of Palestine forgotten, this noble land will be liberated through the blessing of the resistance and struggle of the Palestinian nation and groups.”
The Leader of the Islamic Revolution lauded faith-based motivations and the spirit of steadfastness among Palestinians and noted, “The sole way to free the Noble Quds is through struggle and resistance and other ways get nowhere and are futile.”
Expressing his satisfaction over a 10-point plan offered by the Islamic Jihad Movement for bolstering unity and resistance in the face of the Zionists, Ayatollah Khamenei said, “Emphasizing struggle, total negation of compromise treaties, insistence on the unity of Palestinian groups and condemning efforts made by some reactionary countries [in the region] to reach a compromise with the enemy are among salient points of this plan.”

Stressing that the plan must certainly come into effect, Ayatollah Khamenei pointed out, “Without a doubt, there are people whose mission is to prevent the realization of the contents of the Islamic Jihad Movement’s 10-point plan, [and] therefore, care must be taken that this plan would not [merely] remain on paper and would not slip into oblivion after preliminary and tactical praises.”

The Leader of the Islamic Revolution mentioned “the Grand Arrogant [Power] and the Great Satan,” that is, the United States, as the root cause of many problems with which the region is currently faced, saying, “The goal of all of them is that the issue of Palestine would be downplayed in the public opinion of the region and be forgotten by [regional] nations.”
The Leader of the Islamic Revolution added, “Despite being entangled in some regional issues, the Islamic Republic has always and explicitly declared that Palestine is the foremost problem of the Islamic world and [Iran] continues to fulfill its obligations in this regard.”

The Leader stated that one of the important duties of “Palestinian groups [as well as] Arab clerics, intellectuals and writers” is to keep the issue of Palestine alive in the public opinion of nations, adding, “Double efforts must be made to ‘create the [necessary] intellectual atmosphere and public discourse about the priority of the issue of Palestine in the Islamic world’, so that, subservient officials of certain countries would fear [possible] reactions from nations.”
Ayatollah Khamenei then pointed to the effort made by the United States and its regional allies to create various developments and introduce religion as a factor in [the ongoing] crises and said, “Despite such propaganda, Sunni people of [the Syrian city of] Aleppo, [the Iraqi city of] Mosul, and other cities have been – and are being – massacred by criminal Takfiris. Therefore, these crises have nothing to do with Shias and Sunnis.”
The Leader of the Islamic Revolution described the leaders of Takfiri groups as the “Imams of Kufr (Infidelity)” and added, “One of the most important of regional issues is [the necessity for] public encounter with such Takfiri groups as Daesh, Jibhat al-Nusra [the Nusra Front], and other [Takfiri] groups, because otherwise, the issue of Palestine would remain marginalized due to the constant creation of crises by Takfiris.”

Ayatollah Khamenei stressed the necessity of a firm struggle against the infiltration into the occupied Palestine by Takfiri groups and noted, “The [main] mission of these groups is to stoke sedition and they must be countered through vigilance and firm determination.”
Elsewhere in his remarks, the Leader noted that victory is the “unwavering divine promise if struggle and toleration of hardships continues,” saying, “It is in the nature of the arrogant powers to show hostility toward the front of Truth. Therefore, nobody must be surprised by the continuation of their hostilities.”
The Leader of the Islamic Revolution said continuation of the struggle needs “open eyes and correct analysis of developments,” adding, “This is the way of the wise people and we must continue to struggle with complete vigilance.”

Referring to continued plots hatched against the Islamic Republic of Iran by hegemonic powers, the Leader of the Islamic Revolution said, “We will fulfill our obligations in all fields through heartfelt confidence in the Almighty God’s promise of assistance and are not afraid of the opposition of any bully.”
Ayatollah Khamenei described the young population of Palestine as an important asset and after referring to the significance of vibrancy and continued movement in the West Bank of the Jordan River, said, “As I have said before, the Zionist regime will not exist in the next 25 years on the condition of [continuation of] a public and unified struggle by Palestinians and [all other] Muslims against Zionists.”
The Leader stressed the necessity of complete watchfulness in the face of the enemy’s effort to create internal rift and problems within the Islamic Jihad Movement, adding, “The Islamic Jihad Movement is now even more important that [it was] before.”

During the meeting, Ramadan Abdullah, the Secretary-General of the Islamic Jihad Movement in Palestine, praised brave and wise positions taken by the Leader of the Islamic Revolution and the Islamic Republic as well as the backing offered by the Lebanese Hezbollah for the cause and oppressed nation of Palestine. Referring to the region’s chaotic situation, he added, “Unfortunately, some Arab states have given up the issue of Palestine and are involved in a race to become allies of the Zionist regime.”
Ramadan Abdullah also blamed the current chaotic conditions in the region as the main reason behind the increased suppression of the Palestinian nation and continued occupation of the occupied territories by the Zionists, especially in the West Bank. Criticizing the Palestinian Authority for its cooperation with the Zionist regime of Israel, Abdullah added, “Fortunately, Palestinian youths are now vigilant and have the initiative and pursue [the path of] Intifada.”

The secretary-general of the Islamic Jihad Movement in Palestine mentioned the continued siege of over two million Palestinians in the Gaza Strip and depriving them of their primary needs as another major problem, saying, “According to the 10-point plan, which it released recently and was welcomed by intellectuals and writers in the Arab world, the Islamic Jihad Movement believes that the sole way to victory is resistance in Gaza and supporting the West Bank Intifada, and the Palestinian Authority must revoke the Oslo Accords.”

Referring to a great growth in the combat readiness of resistance groups compared to the 51-day war with the Zionist regime and the increased range and precision of the resistance missiles, Ramadan Abdullah said, “Palestine is a fateful land and as long as the right of its [true] owners has not been restored, the region will not see peace.”