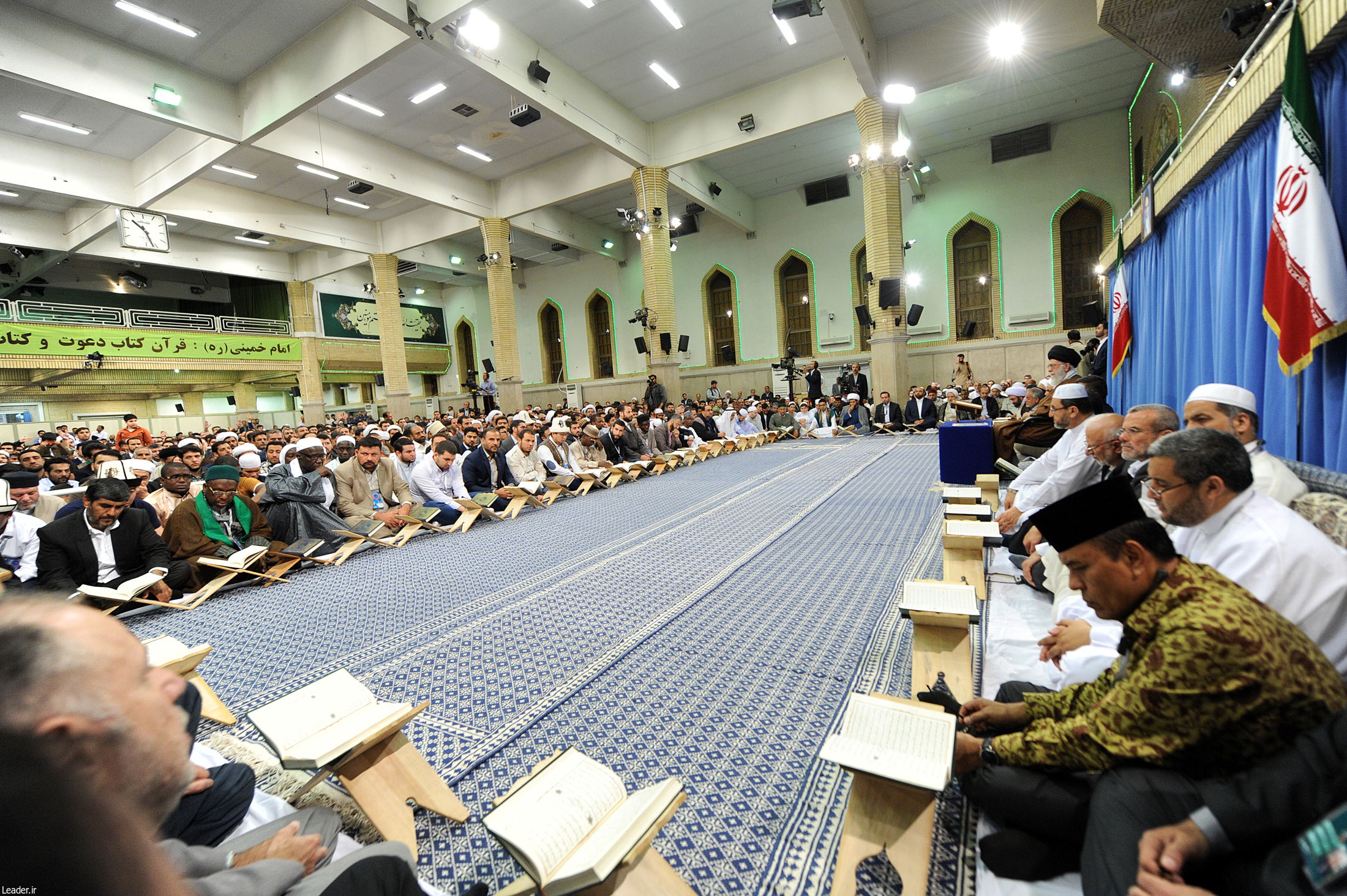 Some regional governments betraying Muslims:Imam Khamanei in a meeting with participants in the 33rd round of International Quran Competitions

Tehran:Leader of the Islamic Revolution Ayatollah Imam Seyyed Ali Khamenei, in a meeting on Wednesday with participants in the 33rd round of International Quran Competitions, referred to faith in God and ex-communication with diabolism as the main and real fundamental of authority and might. Stressing that the United States is the “Great Devil” and “Great Satan”, the Leader of the Islamic Revolution said: “Today, the most important task [assigned] to scholars, intellectuals and elites is ‘enlightenment’ and ‘elucidation drive’ in the face of evil powers’ shenanigans and the Islamic Ummah (community) should not be deceived by the powers’ promises nor intimidated by their threats.”

Offering gratitude to the organizers of this round of competition, the Leader of the Islamic Revolution pointed to the holy Quran as the pivot of “Islamic Ummah unity” and added: “Under circumstances the policies [pursued] by arrogant [powers] are aimed at sowing division and strife among Muslims, the Islamic Ummah must move on the path of unity and cohesion by sticking with this great divine blessing.”

Ayatollah Khamenei said a blessing of Quranic forums was that people from different walks of life, particularly youths, will be inspired by the Quran. The Leader of the Islamic Revolution added: “The Islamic Ummah needs more than ever Quranic teachings and concepts because the realities of Muslims’ life [today] are far distant from the Quran.”

Highlighting massive efforts undertaken by diabolical powers for harming Islam and the Islamic Ummah, the Leader of the Islamic Revolution said: “They know [quite well] that if Muslims are strong and their voices are high and clear they will not be able to oppress nations and the issue of Palestine, which is the usurpation of a Muslim country, will not slip into oblivion.”

Ayatollah Khamenei said the key to thwarting these conspiracies was to stick with the Quran and acquire the main fundamentals of power, adding: “The real power lies in ‘faith and steadfastness’ and ‘ex-communication with evil powers’.”

The Leader of the Islamic Revolution expressed regret that certain Muslim countries are resorting to diabolic powers instead of resorting to God, noting: “The countries in the region that are implementing the US policies are, in fact, betraying the Islamic Ummah and preparing the ground for the US infiltration.”

Ayatollah Khamenei highlighted the Iranian nation’s faith and perseverance and its steadfastness against the US excessive demands as the main cause of the Islamic Republic of Iran’s might, noting: “The reason for these powers’ fear of the Iranian nation and their various conspiracies against this nation lies in [its] Islam-based might and the enemy is afraid of ‘mighty Islam’ and ‘courageous Islam’.”

Ayatollah Khamenei said it was highly necessary for the Muslim world to be careful not to be deceived by the promises of powers and not to be scared by their threats, adding: “Today, the most important task for everyone in the Islamic Ummah, particularly scholars, intellectuals and university graduates in Muslim countries is to struggle for enlightenment and the drive for elucidation of the realities of the Muslim world.”

The Leader of the Islamic Revolution said the emergence of terrorist Takfiri groups in the Middle East region who are waging proxy wars and causing sectarian strife for [on behalf of] enemies was the result of ignorance and lack of enlightenment, adding: “We have to benefit from Quranic forums for enlightenment and those who attend these forums from different countries should guide their nationsand raise awareness in them.”

Ayatollah Khamenei noted that divine assistance depends on the Muslim nations’ drive which requires elucidation, saying: “There is no doubt that the ‘front of blasphemy’ will finally have to step back in the face of the ‘struggling and combative Islamic front’.”

Prior to remarks by the Leader of the Islamic Revolution, Hojjatoleslam Ali Mohammadi, the Head of Endowment and Charity Affairs Organization and the representative of Ayatollah Khamenei in the organization, said the motto chosen for the 33rd International Quran Competitions was “One Book, One Ummah”, saying: “In this round, 130 [candidates] from 70 countries ran in Quran memorization and recitation [sections].”

Mr. Mohammadi commemorated the victims of the September 2015 Hajj stampede in Mina, Saudi Arabia, particularly martyred Quran reciters, saying: “The presence of blind reciters from different countries for the first time, honoring the families of martyred reciters of the Quran and the martyrs defending holy shrines [in Syria], call for articles and studies on the Quran and holding Quranic exhibitions and forums were among activities carried out throughout the 33rd International Quran Competitions.”