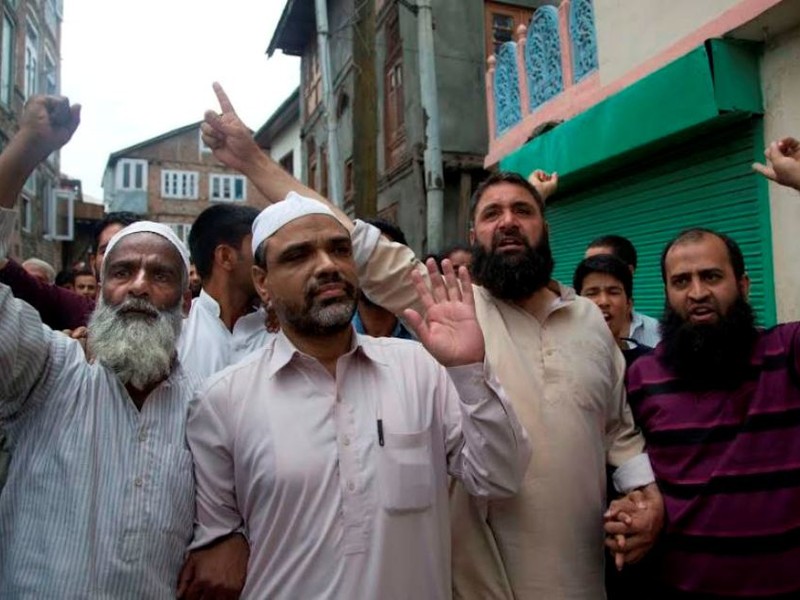 Srinagar:Reacting sharply to the recent conspiracies to create sectarian wedge and to separate Ladakh from the state,the Jammu and Kashmir Ittihadul Muslimeen (JKIM) said a minister from the ruling BJP-PDP was active architect of such nefarious designs and that he was hatching a similar conspiracy in Srinagar.

In a statement, the JKIM President and Senior Hurriyat Leader Maulana Masroor Abbas Ansari said the recent developments were suggestive that some forces were hell bent to create divide among the people when the ongoing freedom struggle has reached a critical phase.

Appealing “all sections of Shia community to be united with their other Muslim brethren in the present struggle”, he said forces were out to create divide in the people be it those living in Budgam, Srinagar, Kargil or elsewhere.

Maulana Masroor said a minister who is active in Zadibal constituency has told youth from a sect to refrain from joining pro-freedom protests.

“One of the ministers in PDP-BJP coalition government had issued a statement in which he said that all the stone pelters are financed by opposition NC. On 15th of August, same cabinet minister brought 50 people from different villages to participate in Indian Independence Day celebrations in Bakshi stadium, while he has never participated in any religious function with other religious leaders of the community,” Maulana said.

Asking Ummah to maintain unity, the JKIM President said, “In a major setback to political and religious leadership of ruling parties and others who wanted to create differences among Kashmiris on sectarian basis, Kargil Shia leaders side with Kashmiris in the present situation.”

“Both said that they will support every decision taken by the people and leadership from Kashmir and are not ready to leave people of Kashmir alone in the present conditions.
President of the Imam Khomeini Memorial Trust (IKMT) Kargil, Sheikh Muhammad Hussain Lutfi said that Kargil will never part ways with the people of Kashmir.”

President of the Islamia School Kargil, Sheikh Mehdi, on the other hand said they would never support UT status for Ladakh region.

“But in Kashmir valley, some so called political and religious leaders are hell bent to create wedge between Muslims by their actions and statements,” Maulana Masroor said.

“It has been noted with serious concern that some quarters in their attempt to divert attention from the ongoing freedom struggle are seen using nefarious tactics with the aim of causing sectarian strife. We are making concerted efforts to foil such nefarious designs,” Maulana said.

“We appeal to all sections of Shia community to be united with their other Muslim brethren in the present struggle. We caution the Muslim Ummah of Kashmir not to be misled by the mischief of a few cowards hiding behind masks who want to vitiate the atmosphere and derail the ongoing movement. It is the job of handful of mischief mongers and the community has nothing to do with the vicious propaganda,” he said.
He said the recent incident of arson in Budgam when houses of a particular community were torched was a part of the same conspiracy.