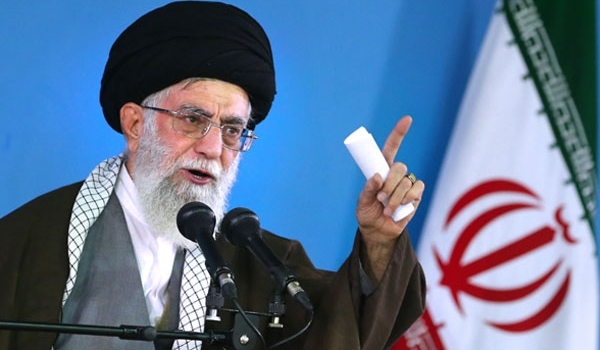 Wednesday 23 Sep 2015: The Supreme Leader of the Islamic Revolution Ayatollah al- Uzma Seyyed Ali Khamenei has singled out the wicked policies adopted by hegemonic powers as the major source of trouble for Muslims.“The wicked policies [adopted] by arrogant powers which bring about big predicaments for the Islamic community in the region” and “the crimes [committed] by the usurper Zionist regime and repeated desecration of the al-Aqsa mosque” are the most pressing issue facing Muslims, read part of the Leader’s message on the occasion of the Hajj pilgrimage.

Ayatollah al-Uzma Khamenei urged all scholars and elites in the Muslim world to accomplish their mission to counter these practices.

“The glorious congregation of Hajj is the loftiest manifestation of this historic duty and a chance for disavowal and one of the most noticeable political rituals [and an opportunity] which should be seized,” said the Supreme Leader.

Referring to the demise of a number of pilgrims in a recent crane collapse incident in Makkah, Ayatollah al-Uzma Khamenei demanded the security and safety of Hajj pilgrims be ensured.

Ayatollah al-Uzma Khamenei made the remark in a message to the Hajj pilgrims.

The full text of the message is as follows:

In the Name of God, the Compassionate, the Merciful

Greetings to the holy Ka’aba, the base of monotheism and pilgrimage place of the faithful and the place on which angels land, and greetings to Masjid al-Haram and Arafat and Mash’ar and Mina, and greetings to humble hearts, and tongues mentioning [God], and eyes opened with insight, and thoughts which have set examples to others, and greetings to you blissful Hajj pilgrims, who have succeeded in answering positive to the divine call and are taking advantage of this bountiful occasion.

The first duty [of Hajj pilgrims] is to muse on this global and historical and eternal positive response [to the divine call]: “verily all thanks and blessings are yours as well as [absolute] rule, [and] there is no partner for you, [and I] accept [your call].” All eulogies and thanks belong to Him, all blessings come from Him, and all the rule and power belong to Him. This is the viewpoint that is given to a Hajj pilgrim at the first step of this rich and meaningful obligation and continuation of these rituals takes place in coordination with it and then, like a lasting teaching and an unforgettable lesson, is put in front of him and requires him to regulate his life plan on its basis. Learning this great lesson and acting upon it is the same blessed spring which can impart vivacity and liveliness and dynamism to the lives of Muslims and relieve them from the problems with which they are grappling – both at this time and in all [other] times.

The idol of [human] proclivities and vanity and lust, the idol of seeking dominance [over others] and submission to dominance, the idol of the global arrogance, the idol of laziness and irresponsibility, and all idols that bring humiliation to the endeared human soul will be shattered with this Abrahamic outcry, when it comes from the bottom of one’s heart and turns into a life plan, and will substitute freedom and dignity and health for dependence and hardship and affliction.

Brethren and sisters who are performing the Hajj pilgrimage, from any nation and any country, think about this wise divine word and through a painstaking approach to problems facing the Islamic world, especially in West Asia and North Africa, define for yourself, in view of your personal and environmental capacities and potentialities, a duty and responsibility and [then] strive toward [fulfilling] it.

Today, the mischievous policies of America in this region, which are the source of war and bloodshed and devastation and homelessness as well as poverty and backwardness and ethnic and religious differences, on the one hand, and crimes [committed] by the Zionist regime, which has taken its usurping behavior in the country of Palestine to the ultimate degree of ruthlessness and evilness, in addition to repeated violations of the sacred sanctuary of the al-Aqsa Mosque and trampling on the lives and property of the oppressed Palestinians, on the other hand, are the foremost problem for all of you Muslims, about which you must think and in the face of which you must know your Islamic obligation. And religious ulema and political and cultural elites shoulder a much heavier responsibility, which is unfortunately ignored by them most of the time.  The ulema, instead of fanning the flames of religious discord, and the politicians, instead of passivity in the face of the enemy, and the cultural elite, instead of being preoccupied with marginal issues, [must try to] know the great ailment of the Islamic world and accept their mission, which they are responsible to fulfill before God, and try to cope with it.

The regretful incidents in the region, [including] in Iraq and the Levant and Yemen and Bahrain, and in the West Bank and Gaza, and in some other Asian and African countries, are major problems of the Islamic Ummah in which the plotting hands of the global arrogance must be seen and for which a remedy must be sought. Nations must demand this from their governments and governments must remain loyal to their heavy responsibility.

And Hajj and its glorious gatherings are the loftiest place for the rise and exchange of this historic obligation. And the opportunity to denounce [infidels], which must be valued through participation of all Hajj pilgrims from all places, is one of the most expressive political rituals in this overarching obligation.

This year, the bitter and devastating incident of Masjid al-Haram, brought bitterness to [all] Hajj pilgrims and their nations. It is true that those who passed away in this incident, who went to meet their God while saying prayers and going around [Ka’aba] and worshipping [God], have achieved great bliss and are, God willing, resting in the sanctuary of divine safety and observance and mercy, and this could be a great source of consolation for their families, but this [issue] cannot reduce the heaviness of the responsibility of those people who are committed to [providing] security for the guests of the Beneficent God. Acting upon this commitment and fulfilling this responsibility is our ultimate demand.