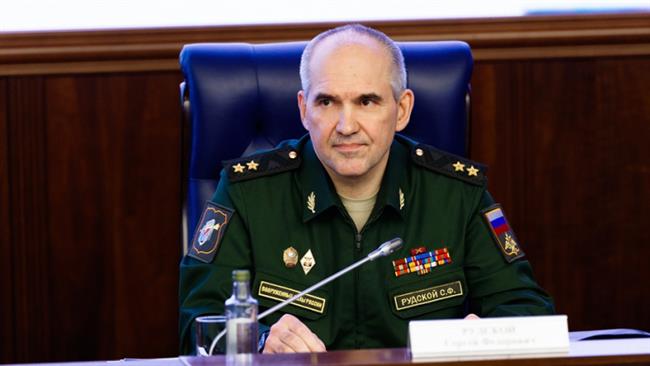 Moscow:Russia’s Defense Ministry says the Turkish government continues to supply al-Qaeda-linked al-Nusra Front terrorists fighting in Syria with weapons in a bid to undermine the Syrian army in its fight against foreign-backed Takfiri militants.

“The flow of heavy-duty trucks with weapons and ammunition, which cross the Turkish-Syrian border every day, does not stop from Turkey,” Sergei Rudskoy, the head of Russia’s General Staff’s main operations command, said at a news conference on Friday.

“This constant supply of man power and weapons has allowed Jabhat al-Nusra [al-Nusra Front] terrorists to continue their provocative strikes and conduct an offensive on Syrian government forces, thus immobilizing their efforts against terrorists of ISIL (Daesh) in other areas,” he added.

Rudskoy further said the al-Nusra terrorists have taken advantage of the ceasefire declared in Syria to restore their combat readiness and conduct attacks in a number of Syrian areas.

“Tensions are escalating in a number of Syrian districts, primarily because of the wish of Jabhat al-Nusra leaders to disrupt the reconciliation process,” he said.

Rudskoy also criticized the US for “further escalation of the military conflict” in Syria as Washington rejected a Russian proposal to jointly fight against al-Nusra. Moscow began its aerial military campaign against terrorists in Syria on September 30 last year upon a request from the Damascus government.

The senior military official also said that the militant groups have captured a number of Syrian populated areas since the truce came into effect in the Arab country.

“As a result, militant units have taken the settlements of Al-Eis, Khan Tuman and Zerbah, which were earlier under government forces’ control. Militants keep attacking the Sheikh Maqsood and al-Zahraa neighborhoods in the north of the city of Aleppo. An offensive on the settlement of Handarat is under way,” Rudskoy added.

Syria has been gripped by a foreign-backed militancy since March 2011. According to a February report by the Syrian Center for Policy Research, the conflict has claimed the lives of some 470,000 people, injured 1.9 million others, and displaced nearly half of the country’s pre-war population of about 23 million within or beyond its borders.

Turkey has been among the main supporters of the militant groups operating in Syria, with reports saying that Ankara actively trains and arms the Takfiri terrorists there and facilitates their safe passage into the crisis-hit Arab state.

Ankara has also been accused on numerous occasions of being involved in illegal oil trade with the Daesh. Russia has released pictures and videos purportedly showing the movement of oil tankers from Daesh-controlled areas in Syria toward Turkey.

Since then, it has killed hundreds of Daesh terrorists and other foreign-backed militants, and inflicted heavy material damage on them.

Since September 20014, the US and its allies have also been carrying out airstrikes in Syria purportedly against Daesh positions.

However, the Syrian government has charged that the airstrikes had targeted the country’s infrastructure in many instances and done little to stop the advances of terrorists.